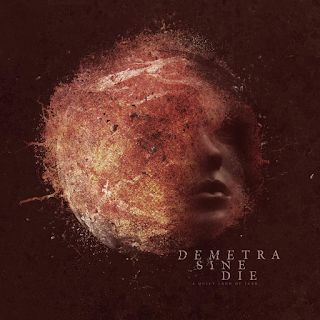 Bands like Tool, Radiohead and Porcupine Tree have taken the listener into our deepest, darkest fears into their music that have been around since the early ‘90s in the underground circuit, they have taken the listeners into uncharted territories that is thrilling, terrifying, and haunting at the same time that made them the new masters of the universe. It is almost the soundtrack of someone going insane and trying to escape to be free, but there’s nowhere to go and it feels like we’re inside the person and understand why he or she is suffering from this mental breakdown and having PTSD (Post-Traumatic Stress Disorder).

And one of the bands that are following in the footsteps of those two bands is an Italian group named Demetra Sine Die, who have a touch of the dark side and have been around since 2003 and the band considers Marco Paddeu on lead vocals and guitar, Adriano Magliocco on bass, Marcello Fattore on drums, and Matteo Orlandi on keyboards. Their second album, A Quiet Land of Fear which is a follow up to their 2008 debut, Council From Kaos on the Bloodrock label, displays a lot of obscure psych-prog-alternative music that is waiting for the door to be burst open and waiting for something to hit like an eruptive explosion that suddenly comes out of nowhere.

Marco’s momentum surroundings resembles Steven Wilson and Mikael Akerfeldt with his vocal styles and fierce and dooming guitar lines that creates a universal yet futuristic boundary and having this wall-of-feedback for a thunderous energetic heaviness to make it sound like a chainsaw that is ready to attack with some wowing moments is unexpected and soaring. Marcello Fattore’s drumming who resembles Bill Bruford and at times Neil Peart, it sounds like a machine gun fire from the time he hits the patterns and seeing where his band mates would go into different directions.

Meanwhile, Matteo Orlandi’s synths make it a passage way with his ambient-like noise and at times paying tribute to the Krautrock scene as well of the early soundings of Tangerine Dream while bassist Adriano Magliocco creates some pummeling and metallic bass lines that is challenging and out of this world and he really goes up the top with his instrument and makes this wonderful lines that is sonically structured and mind-blowing at the same time.

This is a band that knows about the dark side and shows their views of what we go through our lives and they are not showing off, and they create some mythical and mysterious momentum in the album with a volcanic eruption that is waiting to come at you with a bang and with a fierce regulating control. I have listened to A Quiet Land of Fear about four times already and it is hypnotic, strange, and out of this world. If this was the soundtrack for one of Batman's villains, The Joker, who is still trying to make the caped crusader, the Killing Joke, it would be a perfect combination.
Posted by znathanson at 6:56 PM