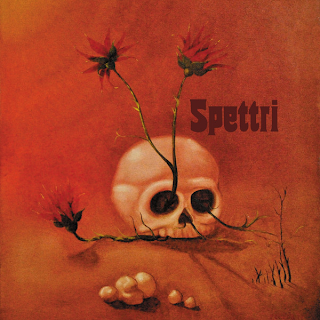 When you have an album that is considered a lost classic like Locomotive’s We Are Everything You See, Marsupilami’s Arena, or Metamorfosi’s concept album on Dante Alighieri’s Inferno, they go up for a huge price on eBay for that one lucky person to have it in their record collection, but if it’s a one band album that was released in 1972 and never saw the light of day, it could be a pain in the neck. When Black Widow records finally reissued this lost and rare gem last year, it’s a piece of hidden treasure that almost wished they could have been having a cult status in their native homeland in Italy.

Formed in 1964, the band considered the Ponticiello brothers, Ugo (vocals) and Raffaele (Guitar), and soon their younger brother, Vincenzo (Bass) joined in followed by Stefano Melani (Organ) and Giorgio Di Ruvo (Drums). The band were influenced by what was happening in both the States and in the UK and they owe debt to Deep Purple and early Black Sabbath in their music and while the recordings are not in the best condition, it’s still hard to believe why this band suddenly never saw the light at the end of tunnel.

But the music itself, is raw, energetic, and in your face at the same time when you listen to it from start to finish. From what I’ve read online, it’s a concept album about a man’s spiritual journey to find out who he really is. At times it sounds like they could have recorded the soundtrack to Alejandro Jodorowsky’s 1970 surreal western midnight classic, El Topo with a heavy attitude.  There’s a lot of power from the five piece group as they go into a darker, hidden, and haunting territory that you could tell the sessions were out of this world and sometimes the scary moments come at you out of nowhere to give you a jump out of the listener’s seats.

Stefano Melani’s organ has some very doomy and sinister movements as if he’s paying homage to Julian Jay Savarin and Peter Bardens to create some heavy atmosphere while Raffaele Ponticiello’s guitar work is very crunchy and have this garage-rock sound at the same time with a fuzztone attitude as Ugo’s vocals at times it has a very bluesy and soulful sound, but can carry the notes where his brothers would take him into whether its high or low on his arrangements, they let him know they have his back.

This is something that needs some attention and Spettri’s hidden sole self-titled album from ’72, is an astonishing lost classic and by far, it’s a twisted and daring piece of work. For fans who admire the obscure Hard Rock and Prog, Spettri’s music is worth the wait.
Posted by znathanson at 1:59 PM

Thank you ! Right on !
Stsy in touch on spettri facebook page, we're back and working on a new project!
Stefano melani Spettri