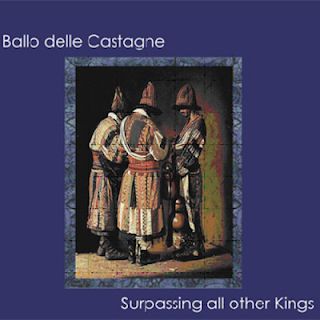 Now when you have a concept album, you know that you imagine the story inside your head while listening to the piece from beginning to end in this dark and haunting scenery, you know that this would be the perfect choice to make it for a film score for one of Dario Argento’s films of the 1970s. One of the bands from Italy is il Ballo Delle Castagne. Formed in 2007 and taken their name from Pope Alexander VI, their music mixes this combination of Heavy Prog, Experimental, Psych, and Avant-Garde music from Germany in the 1970s.

Their third album, Surpassing All Other Kings, is a concept album based on the life of the hero Gilgamesh who was a Sumerian King by building the walls of Uruk to help his people defend themselves from threats and was described as a the two-thirds God and the Third Man. And while this is my introduction to the band’s music from the Bloodrock label that is a distributor to Black Widow Records, it is a dark and haunting album that would take you by surprise.

From the rumbling introduction of Tema di Gilgamesh which begins with a militant rock orientation for the conquering hero to return to his home for a celebration followed by a spooky organ and spacey synths and echoing vocals, resembles a wild combination of Hawkwind and Jacula. Hypnotized of the galloping drums, wah-wah guitar, and an homage to Antonius Rex, the gothic scenery of il Risveglio goes through a maddening atmosphere turned into a deadly nightmare of chaotic structures as they go into this psych-funk rock jam session vibe on il Viaggio.

It all changes into a droning beat on the guitar before seguing into a dooming grand classical piano with a nightmarish hell on the synthesizer with a ghost-like vocals as if it was set in the dystopian universe on Rorate Coeli and with the inspirational tribute of Amon Duul II’s Deutsch Nepal on Konigin der Nacht while the thumping hooks on il Segreto and Aquarius Age, has this zooming psychedelic-nugget late ‘60s vibe, that would have been used in Ralph Bakshi’s 1977 cult classic, Wizards.

They go back into the Starship enterprise for a dosage of the Space Rock genre for an amazing voyage on Fire in the Sky that has some crazy guitar work between the rhythm and lead that is a freak-out adventure into the Milky Way and inside the territorial black hole. And it becomes a calming relaxation as it turns into a lush-like sound of mellotron acoustic acid folk on Eoni as the closer, Apocriphon of Gilgamesh is very political and anti-war piece featuring Bush’s statement during the War on Iraq and statements from the Soldiers as it has some background of fighting for peace and justice with the militant snare drum, horn, and synth makes it show a war for peace can be a tough and risky situation, but the music itself is a dramatic and emotional beauty for hope.

While I’m sinking my toes into the waters of Black Widow and Bloodrock Records, they always release some very interesting prog and doom bands, and this is one of them. I have listened to this about four times and I have to say that I’m impressed on what I’m hearing. I’m going back to their albums sometime in the future, and Surpassing all Other Kings is one of the most heart-stopping and touching albums I’ve ever heard. It’s amazing and you need to listen to it.
Posted by znathanson at 8:45 PM