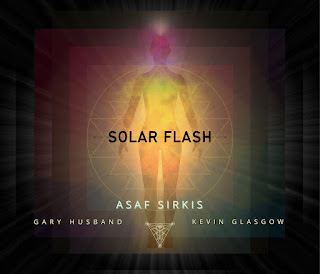 The cover of Asaf’s latest release is a very striking artwork from singer Sylwia Bialas. I can imagine she was inspired by Tarkovsky’s work from the realms of Solaris and Stalker. Or it could have been inspired by something bold and mysterious throughout the pandemic. Solar Flash is an unknown journey that awaits us.

Sirkis himself has been a very busy man working with artists such as Gary Husband, Markus Reuter, Kenny Wheeler, Tassos Spilotopoulous, and Yaron Stavi. The collaborations on this album featuring alongside Husband, contains bassist Kevin Glasgow, and special guest Mark Wingfield. Now that is a collaboration right then and there.

In an interview from 2010 on the Music Without Borders:Innerviews website, Anil Prasad asked Asaf on what were the biggest challenges he faces in his creative process and how he overcame them. His response was this; “As a professional musician and a band leader, I often face situations of stress in which it’s hard to let go. There’s also recognizing your weak points and being able to face up to them and work on them. The trick is to organically combine these elements together in a way so they complement each other and become beneficial to the music.”

Solar Flash is quite a challenging release. And for both Asaf Sirkis and the MoonJune label, it is a fast-driven spiritual beauty brought to life that is like a flower ready to bloom at any second.

The three-part story arc Polish Suite is like a silent movie brought to life. You have these gentle mournful piano work from Gary, setting up this city that is now a ghost town in the middle of nowhere. You can almost feel a pin drop while Sylwia arranges the emptiness of the city that it once was, is no longer there anymore.

Sirkis’ brush on the snare, walks across the town with Glasgow’s bass in tow helping out the melodic vocals to give the last rite in this fair city. Then, he packs his bags and goes into Nick Mason’s city to celebrate The Grand Vizer’s Garden Party from the Ummagumma album.

He becomes this mad scientist on the drums going crazy before this foghorn-like sound from Husband takes full control for Mark’s guitar to send a message to the gods in the sky in the Himalayan mountains in the middle of a heavy snow storm. What Husband, Sirkis, and Wingfield would do is to take listeners into the unknown that is a door-opening experience.

I can see Gary channeling bits of the Canterbury vibes from Hatfield and the North in the style of scale-soaring beauty Calyx. I always envision Robert Wyatt singing the third and final section of the suite. That would have been something to close the curtain down throughout the structure of the composition.

Kinship opens the album with a surf-like wave arrangement that the trio create. You have Gary doing this mysterious balance to channel Matching Mole’s Dave MacRae while Glasgow has some mellowing tones on his Bass. Under the Ice has these cavernous arrangements to set up a film-noir vibe from the 1940s.

Glasgow can go high and low on the fretboards. He captures that smoky atmosphere before Gary lends those smooth R&B touches to know that the case has been solved. Now comes the dark side in Asaf’s arrangements. Aquila is an ominous Mahavishnu approach as Gary sets up this dooming rise on his organ to let Mark come out of Dracula’s coffin and set up this mid-snarling effect he creates to let the Beast calm and subdued.

Not only he channels both Frank Zappa and Allan Holdsworth, it’s almost as if the two maestros are watching him up in heaven, knowing that he’s tipping his hat to them up in the sky and they got his back. For Eric is dedicated to the drummer of Weather Report, Eric Kamau Gravatt. It’s a cross between Steely Dan, Tangerine Dream, and Soft Machine’s Third album.

With the spiritual voice of Sun Ra talking various subjects throughout the piece, it becomes an intensive drive for the instruments to go into this NASCAR race segment to reach the finish line at the end. Solar Flash is not only engaging, but an amplified release this year from MoonJune Records.

When the trio gets together to create something unexpectedly, it is like a cannon blast, knowing that it is going to be a wild ride waiting to be unleashed.

Posted by znathanson at 5:37 PM No comments: