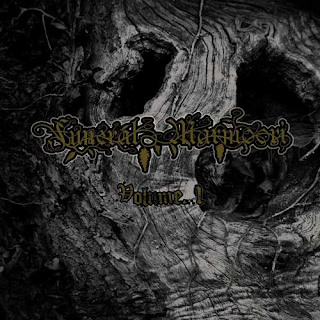 Since the 21st century has been good upon us and the world not ending this year, the Doom Metal scene has been making some excellent progress lately to come up with songs dealing with Horror and the Occult, mixed in with some obscure sounds of the Progressive Rock-era, there’s been a good feeling and well-structured forms to come along with the two genres. And one of the most up-and-coming bands from Italy is a four-piece called Funeral Marmoori and let me tell you, they are really something from the second listening and very powerful.

It has this volcanic eruption that comes out of nowhere, and when the sound with a vicious crunchy metallic guitar work and spooky organ work, it fits everything at the right time at the right place. And when the moment you hear them, your brain will say “Uh-Oh, when they perform, run like hell because there’s not a single stop sign in the neck of the woods.” The band has a dosage of early Metallica, Sabbath, and Van Der Graaf Generator mixed together as one.

They almost could have written a score for one of the British Hammer Horror films of the late ‘60s/early ‘70s as its evidential on the opening title track with elements of sci-fi boundaries with lines of the nightmares coming to life “I don’t want you and I don’t need you/Under the starlight I live/With my nightmares with you desire/Now I’ll take you to gloom.” With some heavy guitar solos, crazy organ and drum work, and a voice resembling a heavier version of Peter Hammill, this combination works like finding rare and hidden treasure that hadn’t been open for millions of years.

On the hypnotic rumbling roars of Black Rooster, the band go into this calming yet satanic psych power and show no sign of stopping with a lot of thunder and electricity in their sound. At times, they pay tribute to the Krautrock kings, Amon Duul II and the Sea Shanties-era of High Tide, and yet like a flaming fire bursting into the night, they go into town for a mighty and intense session for the last few minutes of the piece and their love of the genre.

As I’ve mentioned about up-and-coming bands who are going to make it and are going up the road while trying to reach the light at the end of the tunnel, Funeral Marmoori are going to reach that light as they take into spell-binding moments of the dark and sinister atmosphere. And while they have to doom honors in their sleeves on the dystopian merry-go-round carousel feel on Come With Us, the evil orchestral-thrash sounds of Lorenzo Lamas, and the whirlpool of terror of the organ coming at you into the heavenly sky to attack on Drunk Messiah, their debut album is both a dooming progressive metal and a challenging album to listen to from beginning to end.
Posted by znathanson at 3:26 PM