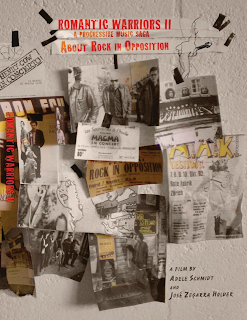 In 1978, at the time when Punk Rock and new wave was happening, and the Prog genre was considered dead by the critics who considered “overblown” and “pretentious dinosaur rock”, it felt as if it was on its death knell. But something strange was happening in the heart of London. The genre was Rock in Opposition (RIO for short), it’s one of the most difficult, twisted, and bizarre genres to come out of the scene that was created by Avant-Prog band, Henry Cow that launched a festival at the Drury Theatre in that time period featuring bands from different parts of Europe including Italy, Belgium, and Sweden; Stormy Six, Univers Zero, and Samla Mammas Manna.

Filmmakers Adele Schmidt and Jose Zegarra Holder, who’ve done the first documentary on the new generation of the Progressive Rock scene back in 2010 with Romantic Warriors: A Progressive Music Saga, has received word-of-mouth through the Prog community and received an Bronze Peer Award for Best Documentary, has shown there is no stop sign for the documentarians to discover the RIO genre. And it is an extraordinary documentary about the history of the genre and why it was completely ahead of its time.

The bands paved the wave for the RIO scene, have finally been given the recognition they deserve as Adele and Jose are the Doctor Watson and Sherlock Holmes of this documentary by carefully researching each of the band’s music and interviewing members who were a part of that movement including Chris Cutler, member of Henry Cow and label manager of Recommended Records, was a wonderful moment and a great moment in the film explained how the genre was short-lived and how he started out the label and opened the door for new indie labels like Crammed Discs, AltRock, and Cuneiform Records to name a few, helped get the RIO genre to be resurrected in the underground circuit.

However, one of the bands that started the RIO revolution was in 1970 by the French Zeuhl group, Magma. And while they weren't a part of the movement, they were an inspiration for the genre. Drummer Christian Vander, who almost looks like a mad scientist, is another excellent moment of the film in where he talks about how he came up with the Zeuhl movement and why they wanted to move away from the Hippie scenery into darker territories of anti-war and sober, silent music and the cosmic universe, “I knew many people who suddenly become ‘Love People’. He says, “I didn’t fall for that, I said to myself, maybe someday, but this is not the time. We were waging a war. Something had to happen.” And that is an impressive concept to get away from the whole peace and love movement into something more evil and terrifying.

Today, new bands like Miriodor (Canada), Sleepytime Gorilla Museum (USA),  Yugen (Italy),  Ruins Alone (Japan), and Guapo (UK), are paying homage to the movement and they have done one hell of a job to carry the flaming fire. One of the bands that I was completely blown away by was Thinking Plague by singing Dead Silence for rehearsals in which it has this King Crimson meets Frank Zappa attitude as if it was recorded in the ‘80s and a small performance at Orion Sound Studios. Also Hamster Theatre at the Orion Sound Studios creating this Avant-Swing Jazz sound performance as if they recorded the score for the Triplets of Belleville and while I adore the new bands like Guapo, Yugen, and Miriodor, I hope to check these bands out later on this year.

So if you hate the commerciality of top ten radio and can’t stand it, watch this documentary and you can tell how these bands took it into different levels and where they can take it up a notch and push the envelope like no other!
Posted by znathanson at 11:32 PM