Orne - The Tree of Life 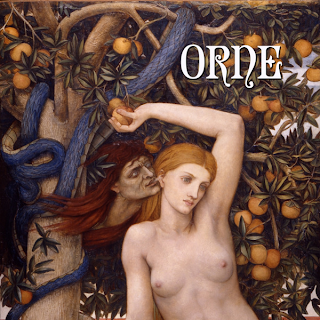 Formed out of the ashes of Doom Metal band, Reverend Bizarre, Finnish’s Orne was inspired by the early Progressive rock sounds of early Floyd, King Crimson, Black Widow, and a touch of Julian’s Treatment and their music has a mellowing and darker approach in their sound and atmospheric beauty when it comes to Prog-Rock. Their second album, The Tree of Life, released under the Italian label, Black Widow Records, is the band’s finest achievement and while the cover resembles Eve ready to bite the forbidden apple by the snake and be banished from the garden along with Adam, it’s worth exploring.

Among other Doom-Prog Metal bands who come from Europe at times including Canadian’s own Blood Ceremony, Orne take their inspiration of the occult into an element of their love of stories from childhood growing up as they were young including tales and illustrations from Tolkien, Brian Froud, Berni Wrightson, and Richard Corben. It has a mellowing and harder edge to it that makes it sound like it was recorded in 1970-71 with a psychedelic twist in there and it feels like they could have recorded the soundtrack to Jim Henson’s 1982 classic, The Dark Crystal.

Beginning with a spoken introduction as it goes into a middle-eastern rumbling calmness ambient atmosphere with drums, choir, and mellotron on Angel Eyes as it segues into the elevated yet ominous organ-driven roar along with a spooky guitar line in the midsection with an operatic feel on the vocals that has a theatrical background on The Temple of the Worm. And then a sample of the late Vincent Price comes for an introduction before going into a tribute and inspiration of King Crimson’s moody piece Epitaph on The Return of the Sorcerer while Don’t Look Now starts off with a moody Gothic-Acid folk surroundings for the first four minutes before it kicks into full gear of a catchy upbeat tempo of guitars chugging, vocals going up, and organ plus drums going into a thrilling beat to follow the rhythm and keeping in time.

Beloved Dead, sounds like a symphonic and grandiose folk turned orchestral beauty piece as if it was left off the sessions for Barclay James Harvest’s Once Again as it features nicely acoustic guitars, swirling yet angelic and heavenly organ work for the first four minutes before it becomes a raunchy heavy metallic ride with a bluesy feel for the ending of the hounds coming at you. I Was Made Upon Waters starts off as a sermon about being born on Good Friday starts off with a ride along the country with a psychedelic twist before it becomes a relaxing spiritual coolness to give Orne a chance to breathe and have the listener to calm down and have a mellotron swarm to make it a wonderful yet beautiful structured sound.

The closer, Sephira, which starts off at first a reprise from the first track before going into a Sabbath-Crimson like feel with the saxophone that has an Adante that makes it crisp, powerful, and haunting at the same time before the narrator closes off the album for the curtain to close down very slowly.  This is a very interesting band I’m planning to check out sometime in the future and they really know their obscure prog very well and The Tree of Life is a must listen to album.
Posted by znathanson at 9:31 PM