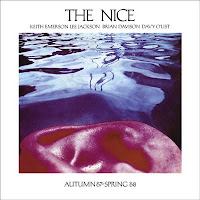 The legacies of the underground scene of the late ‘60s in swinging London have been a huge legacy for The Nice, who has started the Progressive Rock movement. They were a band that was way ahead of their time before it became known as Emerson, Lake & Palmer. Even though The Nice was the architects of the Prog scene and featured the master on the keyboards Mr. Keith Emerson and the early days of neo-classical and symphonic rock sounds of the late ‘60s, they laid the groundwork for their mezzo suites and for their pompous rock beats that you couldn’t dance to. For example, if you love their psychedelic tracks and controversial background to piss off 20th century composer Leonard Bernstein, you definitely need to go beyond the orchestral roots no other than Autumn 1967 & Spring 1968.
This compilation was released on the Charisma label in 1972 with boss Tony Stratton-Smith who was the boss of the label and helped bring; Genesis, Van Der Graaf Generator, String Driven Thing, Monty Python, Spirogyra, and Brand X. On this reissue compilation, it features 10 tracks of their classics and rare eerie numbers that will make your skin crawl with alternative mixes of rare recordings that have never been earthed before. Between those two years of 1967 and 1968, you will hear the raw energy of Keith’s keyboards, the mad scientist of guitar work from David O’List, the dynamic drumming of the late Brian Davison who sadly passed away last year of Brain Tumor, and the masterful vocal and bass work of Lee Jackson. They brought the ingredients of their musical influences of; Blues, Jazz, Ragtime, and Classical orientations in which Emerson was heavily influenced by, that brought the sound of the Nice to a standstill, if you can count the knives he put it in to give it that ‘SHHHRRAKKK!’ sound to make it sound as if it was being stabbed to death from Keith Emerson.
Whether the sound may be what you call Prog, Garage, or Nuggets-related to the European psychedelic scene, this here is an amazing compilation of hard rock, childhood stories, gumdrop tales from Lewis Carroll, and compositions that amazingly goes upward from their early days as a backing band origin’s for Soul singer, P.P. Arnold. There are seven centerpieces that you, as a listener, need to check out if you are getting into The Nice for the first time as a starter if you admire the bombastic rock sounds of ELP. On the whimsical pop harpsichord fairy tale retrospective taste on The Thoughts of Emerlist Davjack, the twisted Flower King of Flies, and the mellotron train pumping rocker of Diamond Hard Blue Apples of the Moon, makes the band sound as if they were a part of the Syd Barrett-era of Pink Floyd’s Piper at the Gates of Dawn or very Traffic like from their Mr. Fantasy album than becoming the orchestral rock band they were that got the bandwagon rolling. Also, there’s the early heavy progressive metal track, Bonnie K which features David’s shattering guitar solo while the demonic Azirial is very eerie and strange. Even though, the killing number which had again the word controversy written all over it with their homage of the 6-minute beginnings of Symphonic Rock, America from the Broadway show West Side Story, is a mind-boggling number that will blow you away while the Cry of Eugene has a very emotional and touching tribute to the Love Song period of the ‘60s that makes it very much Jefferson Airplane tribute.
As a result, even though the band had split up which will be 40 years later, they had a huge influence in the Prog scene and for this compilation, this makes it much cool and a lot of fun to sink in for the Bombastic sounds to sink your mouth into.
Posted by znathanson at 3:59 PM No comments: 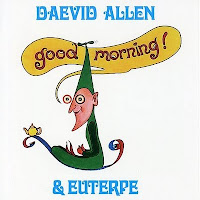 The power of Gong’s music may have been considered Pink Floyd’s little brother of Space Rock along with Hawkwind, if they were formed in the Canterbury scene throughout the Virgin Label of the Radio Gnome trilogy – and throughout the Gnome trilogy, I definitely mean; Flying Teapot, Angel’s Egg, and the atmospheric psychedelic twist of You. For Daevid Allen, the frontman of Gong and former member of the Soft Machine, left Gong in 1975 to pursue a solo career in the Mallocra islands where he and formed a group of musicians from the Spanish island of Catalan, Valenica in which it became Euterpe. The album, Good Morning, has been considered a lost classic among Gong fans, but for Mark and Vicky Powell and the Esoteric family, they have done a great job re-mastering one of Daevid’s lost masterpiece.
Though it was a follow up to 1971’s Banana Moon while it was released in 1976 at the time that Punk was rising up the streams, it shows Allen’s songwriting methods of spoken words between the boundaries of what was left to be arranged between him and the members of Euterpe to created and be organized. Featuring Gong’s space whispers Gilli Smyth and the members of Euterpe; Pepe Milan on Mandolin, Guitar, and Glockenspiel, Ana Camps on vocals, Toni Pascal on Keyboards and Guitar, Toni Ares on contrabass, Toni Tree Fernandez on guitar, Peirre Moerlen on percussion, and Gong bassist Mike Howlett, the results on here are pliant and potent and at the same time ambient into a world beyond your craziest dreaming exhibiting the boundaries of Canterbury Jazz Space music.
There are nine centerpieces on Good Morning that it’s hard for me to pick throughout the songs that are just mind-boggling and crazy at the same time. The eerie acoustic folky crisp of the introduction dedicated to the Children of the New World is emotionally overwhelming while the bonus 9-minute track, Euterpe Gratitude Piece, which is actually the band doing an homage to Tangerine Dream and Pink Floyd, has some spooky vocal backgrounds, haunting guitar sounds, a bell, and a keyboard flourishing the dead sea of the soldiers fighting for their bravery catches the listener’s ear by the tongue including some strange voices that sound very revolutionary and almost a tribute to the Radio Gnome trilogy. The Caribbean Rhythm upbeat tempo of the 11-minute lukewarm jazz fusion taste of Wise Man in your Heart is spellbinding as for the title track, which doesn’t have pretentious big keyboard solos, but more of a celtic experimental crossover, showing Daevid to be a writer of science-fiction with eerie storytelling of the 21st century. There’s also a spooky 15th century tribute to the Renaissance scene with the heavy strumming and fingerpicking along with a ghost-like synthesized moog part on Have You Seen My Friend?, plus the haunting piano ballad which was never been used before in Daevid’s career, but it works quite well on Songs of Satisfaction.
Through various line-ups and this being a spin-off version of Gong, even though they were way ahead of their time, Daevid Allen is now considered a cult hero along with the prog heroes from Catalan, Euterpe and of course the space rock sounds of the Canterbury scene, they could be doing a Gong convention somewhere right now in the 21st century. But for Good Morning here, you began to wonder whether they were stoned making this album or they were having a grand old time in the Islands writing music for Philip K. Dick. Although strange, it’s a must have for any Gong nut or Space Rock craze fanatic to sink their hands on to for the Pot Head Pixies in the Isle of Everywhere.
Posted by znathanson at 7:24 PM No comments: