Psycho Praxis - Echoes from the Deep 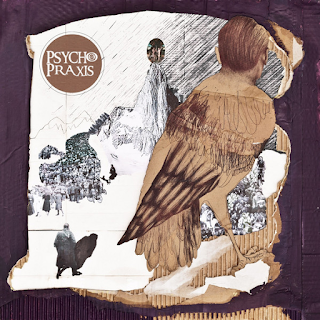 The touches of British and Italian Prog Rock can have a quick inspiration in the sounds of Pink Floyd, Gentle Giant, Jethro Tull, Premiata Forneria Marconi and Metamorfosi and there are some great bands that are carrying the sounds of the golden-era of the 1970s and staying true to the roots of the Progressive genre. It’s quite amazing how a lot of the sounds are taking a lot of the bands and carrying the torch and help wave the flag of the revival.

There is this up-and-coming band from the outskirts of Italy called Psycho Praxis, and their debut album Echoes from the Deep is an adventure through the cosmic voyages of both time and space. Filled with a roaring yet driven organ sound and a dosage of heavy flute work and not to mention some electrifying guitar sounds that they have brought to the table for a lot of ingredients to cook up a wonderful homage to the bands that they have admired, Psycho Praxis have created something special and out of this world.

The album is a mixture of the obscure and the mythical surroundings. And with the opening track, Privileged Station and P.S.M, they come at you at with a hypnotic atmosphere. With a touch of the French Prog-band Ange thanks to Paolo Tognazzi’s keyboard work, Paolo Vacchelli’s heavy guitar rhythm, and Andrea Calzoni’s vocals and his flute styles, is a tribute to Ian Anderson as if the master himself is watching and is very pleased on what’s going on.

Hoodlums begins with a Hendrix-inspired introduction solo that Paolo does before it becomes an elevating and astounding yet a vivid supernatural composition for a 7-minute adventure while the haunting gothic 9-minute acid folk experience of Black Crow for the first few minutes of a dystopian lullaby and the tension is very high as it goes into the soaring clouds while Paolo’s sound of acoustic and electric can take you into a different area.

Then you have a fuzzy bass line work from Matteo Marini and some thunderous drum work done by Paolo’s brother, Matteo as they get into work and go into town for a forceful psychedelic jam session for the last few minutes.  Awareness is Paolo Tognazzi moment to be in center with his wonderful keyboard work by paying homage to Pink Floyd’s Meddle-era into the Van Der Graaf Generator meets King Crimson's Lizard period.

The band follow Paolo’s organ work by going into a Leslie Piano sound into a fuzztone surroundings while Andrea does a Jazzy solo on the flute and you can tell Paolo inspiration of the keyboard goes into the styles of Hugh Banton, Flavio Premoli, Richard Wright, and Tony Banks as the guitar goes into overdrive before setting a calm-like climatic punch. The closer, Noon, the band are now in full circle as it goes into various genres of Eclectic, Jazz, Folk, and Psych and it shows that they could have written a sci-fi piece as Andrea comes in at the last few minutes to give a sermon  .

I have listened to Echoes from the Deep about six times already and it’s a knockout debut of a band that can take the genre a bit further and they take it to an exhilarating, undertaking, and an enchanted piece of work they have brought.
Posted by znathanson at 1:52 PM