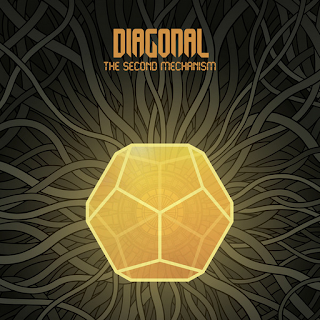 It’s been a while since we’ve heard anything from Diagonal’s music. Four years ago, they came into the Prog scene like a volcanic eruption with the release of the sole self-titled debut album released on the Rise Above Records label with its homage to ‘70s obscure prog and jazz rock that was out of this world. Now in 2012, they are back and are now the new commanders of the Millennium Falcon with the release of their second album, and let’s just say it keeps getting better for them.

The Second Mechanism, is the ultimate science-fiction trip into outer space and it’s the album that will take you beyond the voyages of time and space with different time signatures, heavier keyboard, bass, and guitar lines along with some crazy sax solos, knowing this isn’t your daddy’s prog album. The opener, Voyage / Paralysis, which starts off with sounding like a computer going haywire before the pumping drums and fuzztone bass lines while the band goes into full gear.

The sound of the composition, has the sounds of; early Crimson, Black Sabbath, Premiata Forneria Marconi, and Van Der Graaf Generator in the midsection with a swirling sound of the moog, spacey guitar lines, thunderous percussion beats, and a jazzy bass line filling up the walls. These Yellow Sands, has this beautiful saxophone solo and choir-like vocalizations along with a mellowing and bluesy guitar solo that its terrifying like a horror film from the ‘60s before it becomes a fast-driven finale to make it a combining forces of Jazz, Prog, and Stoner Rock into one.

Mitochondria, which is named after an organ in the cytoplasm that function energetic productions, starts off with this doomy bass line as the guitar and sax come in by doing a Danny Elfman-like introduction for the first two minutes of the piece before it goes into a middle-eastern ‘70s jazz rock up tempo dance that reminded me of King Crimson’s Lizard-era along with the 10-minute epic, Hulks. It features vocals, along with very mellowing and mourning scenery as the band go into a Doom-Prog-Metal format for a suspenseful thriller with some intense sax solo and how they take it up a notch and go beyond the beyond.

The last track, Capsizing, which begins with an atmospheric introduction with a touch of Space and Kraut-Rock. At first it’s a new age sound between keyboard and bass, before it becomes a fast-speeding adventure of reminiscing Manfred Mann’s Chapter Three meets CAN and you have to understand why they admire the obscure gems of the Prog scene and how they stay true to the roots and know how the revival still keeps on coming.

Diagonal are now my favorite band now and this is one of the most heart-stopping and jaw-dropping albums to come out of 2012. If they do a score for a Sci-Fi or a Horror film, I’ll be there for it and show my support. I have listened to this seven times and its mind-blowing, and you need to buy this, a highly recommended album from start to finish.
Posted by znathanson at 1:50 AM