Crowned in Earth - A Vortex of Earthly Chimes 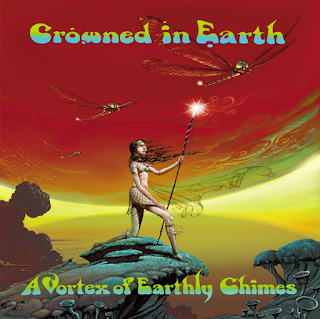 When Crowned in Earth was launched back in 2008 by virtuoso Kevin Lawry, he wanted to make something that was beyond into an uncharted territorial nightmare and set it off with an eruptive explosion and make something that was staying true to the golden-era of the early ‘70s from 1970 to 1974. The music is a combination of both Progressive and Doom Metal combined into one and carrying the sounds of Amon Duul II, Black Sabbath, Camel, Atomic Rooster, and early Deep Purple into the mix, and they are both perfect ingredients that are a wonderful special meal to go beyond the passages of time.

Now if they had recorded some film scores for some of the Italian or Hammer Horror films from that time period, it would be make perfect sense with this out of this world music that can take you into higher places with their second album, A Vortex of Earthly Chimes. And who could not forget such a wonderful album cover that resembles the homage to; Berni Wrightson, Frank Frazetta, and Richard Corben while it feels like something out of the stories from the Sci-Fi/Fantasy adult comic book series, Heavy Metal.

As Kevin Lawlry, who is the bees knees behind the band along with drummer Darin McCloskey, you could tell it’s a combination and thrown in Brian Anthony to handle some fantastic mellotron samples to fill in the atmosphere of Crowned in Earth’s music, this is something worth experiencing.  The music itself is this wonderful mix of a film score set in the dystopian sci-fi universe with a dosage of surreal fantasy of where everything used to be green, goes disastrously wrong with corruption and war between the good and evil on who will control the city for truth or greed.

Four centerpieces like the opening 12-minute epic, Ride the Waves which begins with a haunting lullaby on the toy piano before going into chaotic structures on the heavy guitars that Kevin does as well as playing the spooky organ chords by setting the tension for the evil that comes with a heavy price before it becomes a lushing atmospheric yet moody space adventure and then going into this wild experimentation between the Phallus Dei and the Vol.4-era of Duul and Sabbath combined into one.

Then you have the rumbling doomy yet emotional touches of Watch the Waves that has some classic touches of the Iommi-like guitar styles, ‘80s moog, mellotron, thumping bass lines, and pummeling drum patterns that make it an exciting trip while Winter Slumber creates some psychedelic mass turned calm-like stoner views as Lawlry’s vocals who resembles an operatic version of Richard Vaughan from Astra. The 10-minute finale, Given Time, at first it sounds like a haunting psych stoner tribute on T. Rex’s King of the Rumbling Spires. But it becomes a mixture of a beast roaring with some out of this world guitar solo and organ work in the process for reign terror of mythical stories that can take you into different levels.

This is my introduction to the band’s music, and Crowned in Earth’s A Vortex of Earthly Chimes is a fun and sinister prog-doom album that will take you into different planets and make you one day the ruler and the master of the universe to have full control.
Posted by znathanson at 6:16 PM

Thanks for the kind words!