The Hounds of Hasselvander - The Ninth Hour 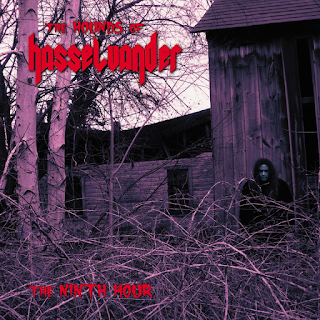 There has been some very good music coming out of the States and in Europe as well and fell into the deep darker territories of the Doom Metal genre that is completely out of this world. And one of the bands I’ve discovered is a group called The Hounds of Hasselvander. At first it sounds like a title from one of the British Hammer Horror films of the ‘60s, but it really packs a punch and this is their third album, simply titled, The Ninth Hour, and let me just say it’s one of the most heaviest and sinister albums I’ve listened to from start to finish.

Joe Hasselvander, who was a part of the band Pentagram and various bands, he really knows his Doom history very well. And with a dosage of the first five Black Sabbath albums and his voice resembling Lee Dorrian and Lemmy Kilmeister of Hawkwind and Motorhead, let’s just say this virtuoso performer has really come a long way since the ‘70s. The Hounds of Hasselvander started out as a solo album that Joe released back in 2007, and then it became a band as a trio and let’s just say they could have recorded the score for the 1973 British Cult Classic, The Wicker Man. And while it’s such a pumped up album, it’s really just to have a lot of powerful moments in five centerpieces on here.

There’s a lot of energy and thunder from start to finish. When beginning of the album starts off with the 12-minute title track, it is really a rumbling nightmarish introduction to get your spine tingling for a start. Featuring heavy percussion that is a calming turned thumping like rapid fire machine guns, swirling heavy guitar lines between rhythm and lead while Hasselvander himself takes it up a notch with his virtuosity to make him push the envelope and go for it.

Elsewhere, Heavier than Thou has this balls-out homage to the Overkill-era of Motorhead with a darker attitude featuring a thrashing metallic punk feel that is eruptive and in your face while the alarm sirens kicked into full gear of depths into hell on their take of Mountain’s Don’t Look Back with a dramatic touch and the Occult views on Suburban Witch.  However, one of the most powerful compositions that’s on The Ninth Hour is the last track, The King.

Featuring a soaring yet inspirational orchestral sound between Organ and the Mellotron in which it has this Horror film background beauty and then it goes into this NWOBHM on-the-road adventure in the styles of Angel Witch, plus a chaotic nightmarish surroundings of the guitars and Joe’s rumbling roaring voice that reflects as if the Beast has awaken to await his feast and see where he would go with this to tell a story that will terrify the villagers and would scar them for the rest of eternity.

Alongside other Doom Metal bands, The Hounds of Hasselvander's The Ninth Hour is not an easy album to listen to from start to finish, but after about the third time I heard it, I knew that this was a band I have to check out and with its Vintage Retro ‘70s and early ‘80s sound, they really got something up their sleeves at the moment and I can’t wait to see what they have next in the near future.
Posted by znathanson at 9:42 PM