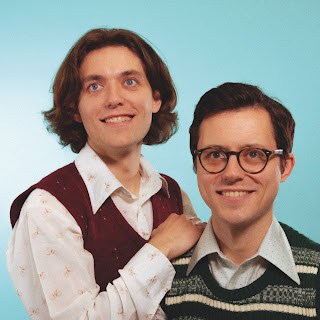 Here’s something that has taken me on a ride that I’ll never forget. Barbara are a duo which considers the Tydeman brothers creating this beautiful pop-orientated sound carrying the aspect of The Beach Boys, Super Furry Animals, City Boy, 10cc, ELO, and Klaatu. Their debut EP Mildly Entertaining is a gripping EP that showcases the Brothers vision on how Progressive Pop is still growing stronger than ever.

The five tracks that are on here, Henry and John delve into this underwater beauty using a lot of the textures that Lynne had done prior to his days as a songwriter, producer, and arranger to get the ideas done right. Now I’m not saying that Barbara are channeling Electric Light Orchestra, but it showcases so much homework ideas that the duo have created.

From Rainy Days in June, you can tell that there’s a bit of Rosalie Cunningham in the song as if the Tydeman’s are tipping their hat to Ex-Purson maestro, knowing that they’re keeping her vision inside the song. It has a dreamy landscape in the atmosphere that soars upwards into the heavens with a West End-vibe, featuring these Queen-like guitar structures to watch the rain drop hitting at the right momentum.

These New Communications is a celebration to give signals in NASA to see if the astronauts are having a ball on the Moon. And it’s a party they’ll never forget. ‘60s organ, string section, talk box effects, wah-wah sounds it’s all there. The song sets up the story that they have become the talk of the town, becoming massive celebrities, and knowing that they’ve accomplished their mission with a massive amount of success.

A Perishing of Cherished Things sees Barbara channeling Graham Gouldman, Lol Mason, and Harry Nilsson rolled into one. It has a reggae twist in the arrangement, but with a bossa-nova groove in the riff from the wah-wah sections. You can tell that they have a bit of humor into the sound as Don’t Send Me Messages has an Andrew Gold vibration from What’s Wrong With This Picture-era in the styles of Lonely Boy.

The closing track BRB has a mellowing record-scratching intro before going into a vaudeville finale that gives the duo a chance to dance to the end by going on their own rocket ship as they head home towards Earth. But, they let listeners know that this is only the beginning for the group. Because they’re just getting started. Their debut EP is quite a trip.

It delivers ideas, hope, and strong vibrations that’ll hopefully get us free from the tricky times of the pandemic when everything came to a screeching halt two years ago. And while the tracks deliver the goods, Barbara are the ones to be on the look-out for in the roaring ‘20s.

Posted by znathanson at 5:41 PM No comments: