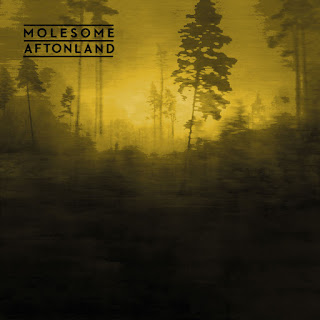 Mattias Olsson does it again by bringing somber arrangements, strange surreal imagery, post-apocalyptic atmospheres, and video game-like scores to life with Molesome’s latest release last year entitled Aftonland. When you put on a Molesome album, it may be a dividing line in the sand for listeners who want to accept Olsson’s invitation or not.

On Aftonland, there’s a strong connection to the Krautrock atmospheres along with the twelve-tone techniques of classical music raging from Arnold Schoenberg, Tangerine Dream, Popol Vuh, post-rock textures of Violent Femmes, Hans Zimmer, and Wojciech Kilar. He brings all of the ingredients and puts them all together to create this landscaping structure to life that is filled with destruction, horror, and the aftermath of the townsfolk by going to another form of life in the next chapter of the book.

Both of the two tracks, Tremolo and Fading Joni, one of which featured a mournful Hammond organ sound, has some dooming guitar textures, and rising beauty that brings to mind a continuation of the Violent Femmes’ Colour Me Once from the 1994 soundtrack to Brandon Lee’s last film, The Crow. You could tell that Molesome are tipping their hat to the American folk-punk band with a funeral-like composition, knowing that things won’t be the same over the loss of a loved one.

But it’s the cello-like sun rising atmospheres that sets up this sun setting environment knowing that something terrible has happened in the little town in the opening track, The Final Option. This is where Molesome go into the towns of Tomaso Abinoni’s Adagio in G Minor knowing that there is a killer on the loose and we have to keep our eyes on this massive murderer and bring him to justice.

Meanwhile Friction showcases the underwater beauty with classical guitar-like sounds and the dawn of a new day that brings to mind some of the Frippertronics that Olsson channels with a bit of a sun coming over the dark, grey clouds knowing there’s a new day approaching as the vocalizations on Vox Humana goes for the 12-tone technique by walking towards the mountain top during a heavy snow storm.

Something that Webern would have really appreciate what Mattias is doing to conduct the vocalist by walking up, down, high, and low arrangements that would have send chills down his spine over the tones of serialism. And it has send chills down my spine listening to this. I could tell that Olsson has done his homework very, very well and double-checked his work very carefully to honor the masters knowing they have his back.

Closing track Exit takes listeners out of the tunnels and into broad daylight and finally seeing the sun again. There’s a big of hope for the townsfolk, but knowing that they hard work and troubles they had in that once dystopian city will be a giant scar on their backs for the rest of their lives. Knowing that they won’t be the same by reaching towards the surface.

Whether you get it or you don’t, Molesome’s music as I’ve mentioned earlier, is very challenging. They take you on this sombering ride that will make you understand what may happen in the Orwellian and the video game franchise, BioShock like no other. But for Olsson, he created his own video game score to life.

Posted by znathanson at 6:54 PM No comments: