William R. Strickland - Is Only The Name 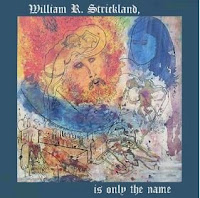 Coming out of the United States that became a novelty flourished proportions at the very end of the flower generation in the late ‘60s, the singer-songwriter, and the mystery of guitarist and vocalist, William R. Strickland, who was admired by Jim Morrison of the Doors, made his only debut album released on the Deram label in 1969, simply called William R. Strickland Is Only The Name.
His only album is almost a cross between Arthur Lee, Wild Man Fischer, Skip Spence, and Frank Zappa’s Freak Out!, it is a mixture of the Avant-Garde Folk scene as if it was twisted in a fucked up way including a Moog Acoustic crisp of Computer Lover which was featured on the first Progressive Rock compilation sampler from Deram called, “Wowie Zowie! The World of Progressive Music.” It is an odd number, but it matches Strickland’s profile on how this piece was way ahead of its time. If you think that song was weird, the album gets even more unconventional than ever before. The opening number, You Can Know My Body (But You’ll Never Know My Soul), which features a mariachi feel done by an orchestra in a British psychedelic feel as if Strickland was an doing a song for Arthur Lee & Love. It has this bombastic sound of the symphony while William is strumming like a madman in this eerie ballad melding Forever Changes and Strange Days-like twisted folk music, Romeo De La Route is pure twisted psychotic asylum piece as if Strickland is strumming and singing gibberish and coming up with some crazy antics while singing in to the mental patients along with Touch which has this dramatic quality and having a dynamic string quartet just going off the wall in this unusual number as he scats and using spoken dialogue that is very Charles Manson-like and almost erotic at the same time when you hear this number.
It becomes more dramatic with If I Stand Here Much Longer, it almost reminded me of a twisted folk song that could have been on the 1973 soundtrack to the Citizen Kane of all Horror films, The Wicker Man. The number has a rising feel with the string quartet while William’s vocal lines become a disturbing nightmare throughout the piece as if he’s fucking pissed off at the whole world as he goes through the temperature rising, smashing guitar strings, and the Jekyll and Hyde personality he comes up with his mind-boggling voice setting the tempo like no other. Oops That’s Me!!! is as fucked up than ever! Strickland’s spoken lines about his childhood in a Scott Walker feel while he attacks the guitar as the music becomes more of The Mothers of Invention technique as the banjo fits the story of his crazy life and then we get into the finale of World War 3½, the last number is a post-apocalyptic anti-war song about the corporation that has innocent young men who believes he doesn’t fit in the scenery in the Army and the Vietnam War. Here, William speaks like the late great Lenny Bruce as he tells the story in this narrative background of the Army and the machine guns they’ll use in the Antarctic and the directions they’ll use in the Snowy land to attack and how to see who is the enemy or not. It’s a comedic and dramatic number for Strickland to do on this humoristic number on this nuclear war story.
He wasn’t a fantastic musician, nor a folky songwriter like Tim Buckley and Nick Drake, but he pushed the envelope to give him total freedom to combine the strangeness of the magic that he gave from start to finish. It’s not an easy album to listen to, but it takes a while to get into when you listen to it about two or three times with the twisted minds of the lost hero, William R. Strickland. And that ladies and gentlemen, is only his name.
Posted by znathanson at 12:30 AM