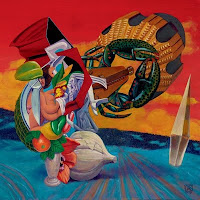 After releasing four albums since De-Loused in the Comatorium in 2003, it was time for the Mars Volta to step beyond the ultimate challenge in which Omar Rodriguez-Lopez mentioned before The Bedlam in Goliath was about to be released last year in January, 2008, he wanted the next Mars Volta album to be an “Acoustic and Mellower” background instead of a Hardcore Experimental Punk Rock sound they did during their heyday after At The Drive-In. Even though the quote was taken aback by most of their fans, I thought why not? just give it a shot.
And after listening to it twice, they achieved another goal with their fifth album, Octahedron defines unbelievable moments from beginning to end with the introduction of the single Since We’ve Been Wrong, which is by far one of the most heartbreaking ballads that you’ll be quite surprised when you listen to it. It almost reminded me of 10cc, King Crimson, and Roxy Music had formed together, created a tearjerking prog love song and then made it more of a Beatlesque vocalization that Cedric Bixler-Zavala has done as if he’s Jim Morrison but all of a sudden it becomes a dynamic climax as Pridgen comes in to pound your heart away on the drums.
Teflon is very David Cronenberg-like disturbing ambient sounds as if this was left off his horror classic, Videodrome. The number has a fiery production with Lopez’s guitar work, Juan Alderete’s fretless bass line while Thomas Pridgen is playling like Billy Cobham as a Mad Scientist on the drums. It then becomes a tightrope that is very dangerous one by one as if someone is about to cut the rope and reach their ultimate death 70 feet down on the ground. The recording is spot on and has a shattering conduction. With its eerie mourning that has a huge debt to Alejandro Jodorowsky’s El Topo on Halo of Nembutals which has synthesized vocals and guitar at moments which sounds like it was recorded in 1982 while With Twilight As My Guide serves up inside a gothic cathedral in a funeral style of pre-Floyd sounds with a classical fingerpicking technique on the Spanish guitar and the slide sounds including the dark-like quality of the keyboards setting up the scenery.
Meanwhile, it feels like they’re back to the hardcore sound of progopunk all over again with Cotopaxi, it has this reunion rocking suite as if you 100% love the John Wetton-era of King Crimson as if you were in your room writing a 7-minute piece and give it to a band and make it play fucking crazy all over again during this psychedelic Robert Fripp style on this stupendous number. When they’re showing the Prog and Punk roots, they go 600 miles per hour as if they were as heavy between The Mahavishnu Orchestra and Public Image Ltd forming together as Desperate Graves sounds almost like King Crimson’s Starless from the Red album. It just goes to show that you don’t need to show off and being a sleazy fuckwad, but show your true identity and your love of music to make it more magnetic or monstrous at the same time along with lyrics that fit the instrumentations that goes along with it.
Now whoever thinks that The Mars Volta sucks, is completely going way off the balance and missing the situation. I mean everyone has their own opinion about The Mars Volta. Love them or hate them, they are a band I truly champion since Frances The Mute and now with Octahedron, which is one of their crowning achievements ever, they will never back down no way and not anytime soon. It is by far one of their acceptable musical environments this year, and no questions ask, It’s magnificent!
Posted by znathanson at 11:53 PM