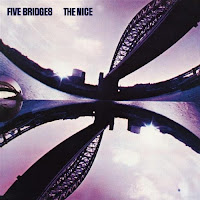 Coming from London, they started out as an R&B band which was lead by P.P. Arnold until it was time for them to move on as when they have become the earlier pioneers of the Symphonic Prog-era. And after having hit singles including; The Thoughts of Emerlist Davjack, Hang On To A Dream, Happy Freuds, Diamond Hard Blue Apples of the Moon, and the controversial 8-minute protest instrumental number, America, in which during an infamous performance at the Royal Albert Hall in the late ‘60s where Emerson burned an American Flag live onstage before being banned from performing there until they came back together 42 years later. But all in all, there was something beyond the singles and the dynamic albums the Nice put out. The Five Bridges Suite, which was composed by Keith Emerson and bassist/lead vocalist David Jackson, recorded at Fairfield Hall in Croydon on October, 1969, showed the end of the Nice’s career but this wasn’t the first time that the band had done a live performance with a symphony orchestra. Let’s not forget The Moody Blues, Procol Harum, Deep Purple, and Pink Floyd in their pre-Atom Heart Mother era, but for The Nice and Keith Emerson himself, this was one of the most shattering live recordings I’ve enjoyed listening to. And if you think that ELP were just a band, wait till you hear this! The centerpieces included on the album, which are their own take of Jean Sibelius’ Intermezzo ‘Karelia Suite’ which features a militant themed style done by the band and some medieval arrangements for the horn section and then the last 2-minutes is Keith fucking up his organ with feedback and trying to smash it Pete Townshend style and making some hissing noises that is right down perfect and then closing it up with a orchestral rock style that sends the audiences blown away from what they heard. The 18-minute introduction of The Five Bridges Suite which features Keith’s classical piano style on the Fantasia 1st Bridge while on the 2nd Bridge the band comes in to do a psychedelic boogie as if it was done in an autobiographical way, the Chorale 3rd is Jackson singing with the orchestral in a melodic tone about the childhood years and then Keith Emerson is doing tradition of jazz and classical music throughout the number-homage to Dave Brubeck and then closing up on the Finale with a Jazz Rock taste to give it a victorious finale with the orchestra.
To become a center of attention is a little dangerous for guitar and lead vocalists, but for Keith Emerson, it was like a breath of fresh air to fuck up the organ and do some crazy stunts with his knifes which were given to him by roadie Lemmy Kilmeister. Influenced by Ragtime, Jazz, and Classical Music as a kid, he brought it to a standstill with their interpretation of Tchaikovsky’s Pathetique Symphony No. 6 3rd Movement while bringing the album close of combining the sounds of Dylan meets Bach in a blues meets jazz fusion version of Country Pie/Brandenburg Concerto No. 6
It may have been an ambitious and a bombastic project for Keith Emerson to do, and more of a colossal feel to it than bringing a band on the road with a symphony orchestra to do a full wide tour, but why the hell not? The Nice released one more album, Elegy released in 1971 after he was getting ready to move on to start a super group with Emerson, Lake and Palmer and then they called it day. While you listen to Five Bridges, you could tell that it was time for Keith Emerson for him to put the Nice to sleep and felt the temperature had gone down a lot. But you can definitely find the tour de force of his beginnings of pre-ELP which was about to be a leap forward for him, a good idea? Absolutely and positive on the spot!
Posted by znathanson at 5:48 PM