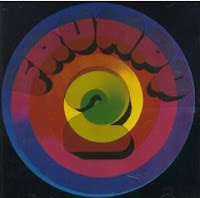 When Frumpy released their debut album, All Will Be Changed in 1970, they had no idea they were reaching a cult status in their hometown in Germany and in England, France, and the United States. After the disastrous gig at the Fehmarn Love and Peace Festival with bad productions and organization along with a stormy weather that almost caused an uproar, they headed back to the studio with a new member. Guitarist Rainer Baumann who was added to the Frumpy line up, brought a proto-shattering piece a heavy guitar work that would make the Frumpy sound authorized unbelievably. Only two of their compositions ran for 10 and 12-minutes while the other tracks remain cookin’ and steaming hot like a NASCAR race track that only runs for 600 miles per hour. Plus when it came to getting down to business for Frumpy 2, the German group knew what to do instead of releasing a single version of their songs.
Even though there are only four numbers on this album, though, it still packs a punch like no other. The roaring 10-minute piece of Good Winds combines a flourished slide guitar, Inga’s vocals going through a leslie speaker to give her double vocals a ghostlike movement, and an eerie harmony that has an atmospheric background coming straight out of the tidal wave which has a dynamic Keyboard solo done for the last 3-minutes done by Kravetz which I bet he was heavily influenced by The Nice and Egg. More of the surprising moments is the 8-minute blues intense rocker How The Gypsy Was Born, which features has a crossover of Free meets Janis Joplin in this prog-ballad/ up tempo beat like no other.
The last two numbers is an exaggerating groundbreaking driving forces in their own compositions that they write really fucking awesome to. Take Care of Illusion represented proto-hard rock with a sinister tone with an exhilarating slow-down beat along with a symphonic organ-like solo that sounds like its winning the race while the guitar is doing a heavy Hendrix relative solo as Baumann takes it up a notch. And if you think the album is done, well guess again my dear prog and krautrock fans. Unite at once with this heroic 12-minute finale of Duty, a suite that doesn’t need any introduction or presenting the suite of the year of 2009. Its another tour de force epic boundary that shifts through a mourning funeral keyboard sound that is similar to the mellotron while Inga is singing about the brave life of a man who fight for his duty and his family while serving in the army and died to sacrifice his comrades while the gospel funk rocker moves the groove up a notch from Canterbury Fusion to Wah-Wah guitar rockin territory that is funktified that is very similar to Hendrix’s own group the Band of Gypsys to a full on heavy rocking jam that is worthy to the Fireball and Machine Head-era of Deep Purple in which Jon Lord would have been very proud of and then to the Led Zeppelin homage during the last 4-minutes as it becomes very heavy and very humble to the proto-heavy metal homage of the those two bands combine as they go off the wall like no other.
After the release of their second album, Frumpy went on to release their last album released in 1972, By The Way, and then called it a day after the three members of the band started to form their own band called Atlantis. A couple of years later, they came back at the beginning of 1990 with the release of their reunion album, Now. And years and years later, their music still captivates their fans across the European globe. Their second album, still its way ahead of its time, but it could help to understand why they were the powerful rock and roll band to come out of the Kraurock-era of the 1970s.
Posted by znathanson at 9:39 PM