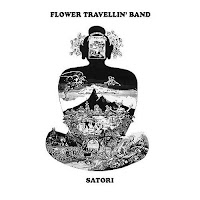 It’s easy to pay tribute to Flower Travellin’ Band who are considered one of the most influential bands to come out of the Land of the Rising Sun. But when you look back at their early catalogue from the early ‘70s you began to realize that Prog isn’t just a four letter word, but there were some cool and obscure bands to come out of that era that inspired bands like Iron Age and Grails who considered FTB their true inspiration in their sound of music. But there was one album that would put these guys on the map and define the term Japanese Hard Rock or shall I say J-Hard Rock of the ‘70s that it reminded me, a perfect alternate soundtrack to the ultimate Anime series that defined the genre with the cult favorite of Action meets robotic arms meets controversy, Trigun and Serial Experiments Lain.
The result is Satori. One of the most unbelievable albums to come out of Japan, it has all the ingredients that it needs: pounding guitar sounds, cowbell, screeching vocals, the mixtures of sitarla which is pre-inventive guitar before guitarist Hideki Isima created the strange instrument before reunited with the band over 37 years later, and of course dynamic time signatures that completely fly off the wall particularly from Ishima himself who comes up with some sinister moments on the guitar while Jun Kowzuki and Joji Wada team up like brothers with the bass guitar and drums and create some tensional surprises that take up the 5-part tranquility of the composition that could have been a large debt to Aphrodite’s Child’s 666 and Eloy’s self-titled debut album. And then, there’s lead vocalist Joe Yamanaka who does some explosive vocal arrangements including some screaming and the harmonica solos that he does during parts 1 and 3 where everything is proto-progressive death metal. The centerpieces of Satori are just explosive. If you are ready to face the challenge of weird hard rock coming out of Tokyo and play a shit load of Anime Episodes while you’re at it.
The Indian Psychedelia raga sounds of Ishima taking over Part 2 which a mixture of shuffling and virtuoso solos that is Zappa-like style as he plays the Sitarla for the rest of the seven minute suite. It is almost as if Ravi Shankar joined up with Deep Purple and created a new instrument that would have audiences go apeshit over the new musical device that Hideki plays extensively while Yamanaka is hitting the right notes at the exact time as if he’s a Japanese version of Robert Plant with the high and screeching notes. The outstanding display of Part 3 and Part 4 sounds almost like Vangelis’ 1973 debut album Earth which is almost a sequel to 666 at their Indian meets Samurai experimental qualifications of Krautrock like an Arabian Night story that is very sexy and erotic at the same time during the arrangements while the opening introduction of Part 1 is a cross between Black Sabbath meets The Mothers of Invention metal gone avant-garde of a reminiscent. The finale, Part 5 could only be described from the Tokyo gods that are well researched in the debt to King Crimson’s pre-Red era with their stop and go moments and the experimental dalek treatment that seems perfect for a Japanese Horror soundtrack ala Dario Argento style.
Anyway, a new generation of fans to discover J-Hard Rock music, must check out Flied Egg’s Goodbye album, the first two Speed, Glue and Shinki albums, Strawberry Path, and Flower Travellin’ Band’s Anywhere album, but if you are planning to buy Satori, be warned. Even though it is considered the best work from their career, it might have your brain fucked up in the ass by taking a shit load of drugs or get blown away.
Posted by znathanson at 9:22 PM