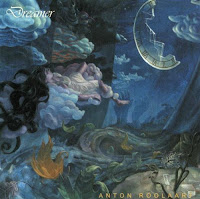 The homage’s of Yes, PFM, Genesis, and ELP is all on here for Anton Roolaart and it is gigantic than what you think. Since being a DJ for Live 365 with progrockradio.com, he released one of the most magnetic debut albums to come out of the tributes to the Symphonic Prog-era of the ‘70s. It is more than likely a magic carpet ride for him to do a genuine favor and he’s one of the best musicians to come out of the Netherlands while moving to the United States as a teen and listening to the prog giants he grew up listening to, Roolaart is now the king of Symphonic Prog Radio DJ of the 21st century.
Right from its beautiful front sleeve of its dreamland artwork, Dreamer looked exactly like that. Recorded in New Jersey from Anton’s Studio and at Lakeside and Studio X, it sounded beautiful and almost medieval at the same time, almost an autobiography from Anton’s childhood years. But there is a huge tour de force from Anton’s guitar work and his dynamic vocals from the arrangements of Jon Anderson and Greg Lake from his own background musical touches that he put together on the album from start to finish by leaning forward the Prog Rock touches.
All in all, this is his magnum opus yet almost a tribute to the Marks I & II-era of Yes’s early days with a touch of symphonic beauty as well as Moog noodling also. Adding musicians to bring the debut to life with; Keyboardist, Rave Tesar; Bassist, Vincent Puryear; and drummers Rich Berends and Charles DesCarfino to the core and doing turning points with impressive compositions they pulled together to make it work like a charm. From the ambient opener of Near or Far to the eerie cavernous Tolkien-related number of On to the Afterglow, Anton knows how to present the album and coming up with some huge surprises that will make you emotional than ever! The ideas of the two genres take to unexpected lands and flying up into the heavenly clouds. It isn’t just a Progressive Rock album, but more of a tribute to the genre and how importance of how Anton does it so well.
For example, the dream-like 6-minute title track, is embodied by the mysterious guitar work done in a David Gilmour-esque technique with a smoothing hard rock feel of Anton’s touches while Scary Monsters is almost like a lost track from Steve Howe’s debut album that controls the dreamland quality of the nightmares that we see of disturbing monsters in our dreams. Elsewhere, Color of your World (not to be mistaken of Little Mermaid’s Part of your World don’t ask why) has the atmospheric guitar work, fretless bass work, and an explosive melodic background that shows the influential sound of Pink Floyd’s Dark Side of the Moon, and Mid Summer’s Day which could have been a tribute to the work of William Shakespeare’s career of a Midsummer’s Night Dream is folky acoustical keyboard rocker ala Rick Wakeman style as it has this unbelievable up tempo beat. There aren’t any downsides to the album. Manon is a mixture of rock and an eerie track that is a resemblance as if Dream Theater were formed in 1973 in London with a view of the city that defines the situation as if Anton was in Italy writing the song during the making of his debut album and The Spider is spooky and strange. It’s has a enhanced mellotron melody and a darker feeling about the web-like creature coming down to meet their fear and phobia of the small-like creature, playing it makes it very interesting for a simple Halloween track.
Dreamer will definitely receive a positive feel from old and new generation of Progsters to get an idea with some magnificent ideas. It’s absolutely worth the wait to buy it.
Posted by znathanson at 6:53 PM

I'll check them out either this year or next year. Thank you for letting me know!