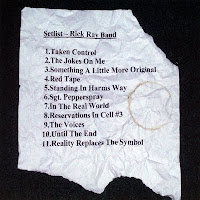 After I was finished with High School and moving on to Community College, I would look at bands that never saw the light of day. From the Italian’s to German’s answer to the Progressive Rock genre, they knew their fire was red hot on the spot. Bands like; Banco, PFM, Le Orme, CAN, Amon Duul II, Faust, il Balletto Di Bronzo, and Ash Ra Tempel to name a few, these were the bands that know the score and always receive a cult following around the world and in the States for Prog Festivals. But there is one band that took me by surprise and that is the Rick Ray Band and their album, The Setlist, which is their 31st album! I bet Frank Zappa would be surprised if he was alive today when he would listen to it from beginning to end. This is no fucking excuse. Listening to it, you get the feeling that the resurrection of the genre is born!
While it pays tribute to the virtuoso guitarist from the influences of Frank Zappa, John McLaughlin, Alex Lifeson, Steve Hackett, or Jimmy Page to name a few, the opening number Taken Control is a high-speed chase number with some odd signatures that go beyond the infinity while The Joke’s On Me is a dazzling composition as Dennis Corrigan’s vocal’s arrangements is similar to a Southern Rock style of Molly Hatchett meets Thin Lizzy ala Jazz Fusion style cranked up to 200 maximum high voltage. Something A Little Original starts off with a rumbling introduction and then going into the train-sped chugging display with an instrumental experimental jam session making it feel of King Crimson meets Rush meets The Soft Machine’s third album playing all at once, like a mad scientist creating a dynamic musical opus, but crazy like a motherfucker also, in a big way.
The rest of the compositions are a flaming fire that won’t burn out with homage’s to its ‘70s hard rock and prog rock tributes. Red Tape is a tension of early Judas Priest-tribute political rocker; Standing in Harm’s Way places an interval of Blues Rock meets Amon Duul II’s Dance of the Lemmings with a heavy sax solo done by Rick Schults who is paying tribute to Elton Dean on here; Sgt. Pepperspray, which to me is their homage to the Beatles psychedelia classic of 1967, they go up the mountains to pay tribute to the Liverpool gods in this Beatlesque jam rockin’ groove beat; In The Real World comes in with a Canterbury Jazz Metal taste that would have made Robert Fripp giggle for joy; Reservations in Cell 3 is an homage to UFO’s guitar work of Michael Schenker while The Voices has the Jam Band feel as if The Grateful Dead were a Heavy Metal band instead of a psychedelic hippie band that features the entire band doing an explosive solo background throughout the song. The last two numbers just goes to show that the Rick Ray Band show no sign of stopping. Until The End comes in with the Crimso treatment again with a bit of Rush’s La Villa Strangiato shuffle rocker along with a Math Rock style as they bring down the house in this eerie number. But if you think the album’s over and done with, think again as it ends with Reality Replaces the Symbol, a political number that goes from the economic system going fucked up in the ass as it shifts of again the music of Rush’s first seven albums and Rick Wakeman’s 1984 in an sinister twist that you’ve never heard before. With a cross between Sax Rock meets Jazz Fusion that’s way beyond fucked up in a good way that is championed of Neil Peart’s lyrics.
Since 1999, of carrying the resurrection of Prog, they found a way to kick a shit load of ass and they deserve a lot of attention to new coming bands who have a love of music while getting the flowing juice going again.
Posted by znathanson at 12:29 AM