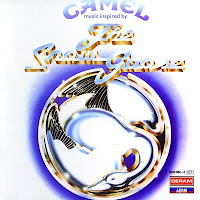 From the scenes of the Canterbury circuit that was happening in the beginning of the ‘70s, there was one band that would bring that genre along with symphonic to a new beginning. Camel was the band to bring the forms of music from ambient, atmospheric, jazz, classical, and experimentations to an all time high. After releasing the first two albums (Camel and Mirage), it was time for them to step forward with their musical arrangements as it shows with the re-release of their three albums showing the band’s surprising magnum opus’s fully reissued.
1975 was a magical year for Camel when they released their concept album based on Paul Gallico’s novel. Music inspired by the Snow Goose shows the band moving away from the lyrical treatments to more of an instrumental album. However, Paul didn’t want any part of it because he was anti-smoker and felt that Camel was part of the smoking contribution. So it was almost a lawsuit when Camel decided to change it with what it is now shown on the album today. The Snow Goose tells the story of love, friends, and disturbing elements of War that was happening in the early part of the 1940s. Even though the story has an emotional quality, the music with its stroking beauty that fits well with the short story, is one of a kind and very eerie at the same time.
Their next album would push them to be almost considered the Canterbury Symphonic version of Tangerine Dream. Moonmadness, released in 1976, showed the concept to a more space-like musical direction than your typical epic song suites. This is one of Camel’s essential album, in a gigantic magnetism, this album shows the band’s arranging and composition. In the songs, they are each written by the band members that were based on their instruments and accompaniments from what they were doing at the time they were making Moonmadness. Track by track, it is almost as if Stanley Kubrick could have done something to score for his 1968 classic, 2001: A Space Odyssey. Imaginative and dynamic, centerpieces like the Moog space trip, Aristillus done by the late great Peter Bardens, the spooky ballads of Spirit of the Water and Another Night based on guitarist Andrew Latimer and drummer Andy Ward while his composition of the 8-minute celestial body of Lunar Sea is one of the best instrumental numbers to ever come out of Andy’s drumming that is very magically and ambient at the same time.
After Doug Ferguson left and adding new members including King Crimson’s saxophonist Mel Collins and Caravan/Hatfield and the North bassist and vocalist, Richard Sinclair to the Camel line-up they released their next album, Rain Dances which was released in 1977. With this album, the band moved into the Jazz Fusion and a little bit more of the mainstream direction. It has a smooth quality, but a bit radio FM quality to the mix as if this album had some hit singles on the boundary for Camel to do. The numbers are quite interesting in a Jazz-oriented way. For example, the opening 5-minute arrangement done by Mel Collins who takes the sax wherever it goes while the band do an homage to Return to Forever on First Light while Metrognome is very Beatlesque in a lyrical sense done by Richard Sinclair and then it becomes a passage speedway in which Latimer takes his virtuoso guitar solo to new heights that we’ve never heard before. Meanwhile, it becomes very new age which was unheard of for Camel to do. This time, with a little help from Roxy Music’s keyboardist Brian Eno, on the spacey environment, Elke which is odd, but in a good way.
Decades later, these three albums from a influential band qualified a way to look at music and to listen to in an anthropolgic way
Posted by znathanson at 10:31 PM