Frumpy - All Will Be Changed 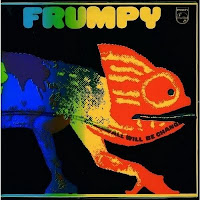 When people think of Krautrock, they say; Can, Amon Duul II, Cluster, NEU!, and Kraftwerk, to name a few. But for one band who came out of Hamburg, Germany, it goes to show how important this band can really rock at the beginning of 1970 with their quintessential debut album. Frumpy had power and a vision including female vocalist Inga Rumpf. Her vocal arrangements which were influenced by the Blues and Soul sounds from; Janis Joplin, Nina Simone, and Aretha Franklin, she captivated the sound of her voice and the way she sang like no other that had fans crying because of her majestic voice. She is still considered the most influential female vocalist as being number one in Germany to this day.
Alongside Inga Rumpf, the other members of Frumpy have real talent and are excellent musicians. The display of the best effects from having a wide variety of skills from Karl Heinz Schrott, who bass guitar sounds pre-Jaco Pastorious can allow him to do anything he wants while Jean-Jacques Kravetz, who plays the keyboards insanely like a cross between Peter Bardens and Matthew Fisher, is almost like a Mad Scientist to let him do whatever the hell he wants to mix in some dynamic solos while Carsten Bohn drumming is like an industrial factory sound that has a shattering performance as if he was born in Birmingham, England. Formed out of the ashes of the folk group, City Preachers in 1969, they decided to move on from their Folk influences into something that no other band could have done before. “Well, the record company had been impressed by our live shows” Inga Rumpf mentions during the liner notes of the debut album. “We didn’t have much time, so that’s why one week between two shows had to be enough for the whole production.” They were signed by Philips Records and soon recorded their debut album in only one week and released, All Will Be Changed.
The idea of recording it one week was unheard of, but it worked because the deployment in a sequel between Rumpf’s vocals and Kravetz’s keyboard playing of the Hammond Organ, creating a blues and jazz rock sound of the nine tracks to make it seem like their enjoying themselves while recording it from start to finish. With its influences raging from the Blues, Jazz, Folk, and the Hard Rock sound, All Will Be Changed pushed the envelope really hard. The opening, Life Without Pain, is certainly an outstanding achievement. A Gospel Rock exercise not taken away from Dusty Springfield’s Memphis Sessions, the music becomes more developed into an approximation of an emotional Motown ballad. In a style of a gothic church-like manner, with its suites, Rosalie parts 1 & 2 along with Otium has more in participation with Traffic meets The Nice while Indian Rope Man has a ferocious darker tone that could have been on Hendrix’s Electric Ladyland or Miles Davis’ In a Silent Way. Morning is Schott’s piece as he does an incredible bass solo in this Jazzy Funk fusion ala African Rock style! The finale of the suites sequel is Floating parts 1 and 2 as Kravetz, who does a tribute to Keith Emerson in this sneering Organ solo for only seven minutes on Baroque, he just plays it like a motherfucker and like no other that you ever heard before on any prog album and tell me how good this piece is.
Surprising? Shattering? The Answer, Yes. The numbers seems very anti-singles but it goes to show how damn good Frumpy were and how far ahead of their time they wanted to go beyond the boundaries after getting ecstatic reviews from Sounds by the time it was released in 1970. Its still one of Frumpy’s and Krautrock’s unbelievable lost classic.
Posted by znathanson at 3:29 PM