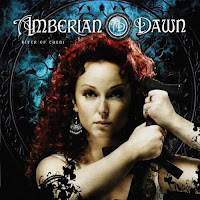 Listen, very carefully, you are warned about Amberian Dawn. Think Metallica meets Within Temptation. And it’s a very good description about this Symphonic Metal band to come out of Finland.
When I’ve first heard River Of Tuoni and the band themselves, I realized how much I’m getting a real kick out of this new sound of Metal with Female Vocals to come in the limelight with a study of classical and operatic vocal arrangements thanks to the voice of Heidi Parvianinen. It’s hard to look at bands like; Nightwish, Symphony X, Ayreon, Delain, Leaves’ Eyes, and Opeth to name a few, but with the sound of classical music which have influenced the band to create a knock out debut album would have make Wagner very happy. What Amberian Dawn did with River of Tuoni, which was released in 2008, made one hell of a symphonic power album from start to finish.
There are some great songs which clocks in for 37-minutes are found here with only ten tracks. Now understand, there aren’t any big epic tracks which other Metal bands in Europe are doing to please their fans whether they admire the sound or being Prog-heads which they have their feets tickled by to hear 8-minute stories set in a Viking-era, example including Within Temptation’s The Promise from the Mother Earth album. With the ingredients added together to make a orchestral rhythm section and beautiful hard rock melodies along with Heidi’s vocals, it just goes to show how this band’s train has only just began to chug.
River of Tuoni has the Prog and the Power touch of Metal which is very much an homage to an operatic metal version fist of Iron Maiden, but with the ambient sounds of Tom Sagar’s Keyboards. Combining the sounds of NWOBHM (New Wave of British Heavy Metal) and Thrash Fast Metal everywhere, including the guitar sounding like a machine gun including the drum section thanks to Tuomas Seppala and Heikki Saari and Joonas Pykala-Alo, there are amazingly flaming arrangements since 2006 in which they formed the band in Finland. There are four enduring numbers which could make Amberian Dawn a household name in the Symphonic movement of Europe.
The middle-eastern kettle drum mixed dramatic elements of Passing Bells helped the beauty of power chords, harmonic high vocals, shattering guitar solos, and something straight out of Homer’s Odyssey. More heavy is the opening title track, which features again Tuomas Seppala’s guitar introduction which is similar to Maiden’s guitarist Dave Murray as he plays with magnetism on this mystical track while the haunting beauty, My Wings Are My Eyes, could have been set in a Dark Gothic Cathedral. Yet the best of the album is Valkyries, a pleasant hard rock train bullet track, could have been the opening number for Clash of the Titans with a lot of storm sounding force of keyboards, drums, and guitar bursting through the floodgates.
Now again, the band is just getting started to get the magic of Symphonic Metal going. It’s going to see how they are going the fly through the heavens. But now, enjoy River of Tuoni and you’ll understand why Amberian Dawn is one of the best bands to come out of Finland and being Nightwish’s kid sister is a good thing.
Posted by znathanson at 8:39 PM