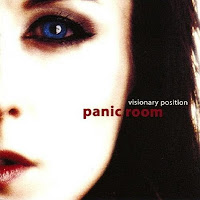 Now for me being an admirer of Female Progressive Rock, I was taken aback of hearing this new band called Panic Room and their debut album, Visionary Position. Formed out of the members from Fish’s band, Mostly Autumn, and Karnataka, this is an excellent combination for this five-piece band to come out of Wales. When I first heard this album from start to finish, I was a little skeptical at first, but after listening to it, I relalized that this wasn’t just a Prog album, but a magic carpet ride to delight the 21st century off with a bang.
Panic Room are; lead vocalist Anne-Marie Helder, guitarist Paul Davies, keyboardist Jonathan Edwards, bassist Alun Vaughan, and drummer Gavin John Griffiths. And what they do is they bring their compositions right on to the table to make this album a tour de force dreamlike beauty and mesmerizing hypnotic desirable pleasures. Also featuring additional magicians including; Peter Charlton on Acoustic Guitars, Liz Prendergast on the electric Violin, and Gary Phillips on Nylon guitar to bring Panic Room’s music beyond the infinite while pulling a rabbit out of the madman’s hat and seeing how many tricks they can pull together as a team. It’s very understandable that a lot of energy, reproducible in the amount of performing, and composing going together in each song, chord, and experimentations that features throughout the album’s complexity and for only eight tracks for only an hour.
The reaction here is a beautiful and landscape album that would take your breath away. Elektra City, which was featured on the Prognosis 1 compilation CD done by the people at Classic Rock Magazine, starts the album off with a signal to the spaceship and the heavy guitar work, takes a while to get into as it becomes an early reminiscent of ‘70s Floyd material as Anne’s vocals becomes very robotic-like on the Leslie speaker, it has a Space Rock feel for the first few minutes, before it becomes a symphonic rock sound to make it very neo-fusion up tempo beats while Endgame (Speed of Life), an atmospheric twist that is a whirlpool of imagination to open up the doors with a dynamic and tension that would make Panic Room very happy. Firefly is a piano ballad which is very autobiographical and could have been the ending theme song for The Land Before Time while Moon on the Water is almost a sequel to Firefly, but in a Celtic way and shows Anne’s roots in the folk angelic vocal arrangements ala Welsh style from her days in her childhood.
Reborn which is written by Edwards and Helder, has that alternative rock groove as it deals with rebirth and seeing a new beginning in a new decade as the guitar has layered sound as Anne’s half vocal/spoken material fits the song very well. Apocalypstick which features Gary Phillips on the Nylon Guitar, does an Egyptian feel as if the band recorded this eerie number in the Sahara Desert that represents an Indian Neo-Symphonic Rock taste. I Wonder What’s Keeping my True Love Tonight is back again with the Celtic Folk treatment.
It has a mournful taste to say goodbye to a loved one ala Enya style while the 18-minute epic, The Dreaming closes the album to a sonic ambient beauty almost a resemblance of Tangerine Dream’s Phaedra meets Sigur Ros’ Agaetis Byrjun and then reminiscing the sounds of Yes Going for the One-era as the epic takes the listener on a spiritual journey like no other. There’s room for this band, but I still think they got more compositions up their sleeve.
Posted by znathanson at 10:34 PM

Wow - great to see you reviewing Panic Room - Alun from Panic Room is doing a remix of one of my songs at the moment - excellent!

Tell him I said hi!