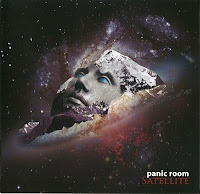 A follow up to Visionary Position released last year, it looks like Panic Room are definitely creating a following in 2010 with the release of their second album Satellite. This new album shows them going on an amazing journey and working as the dream team rather than working in a corporal mainstream music business, but as they go on the road, it will show the perfect match made in heaven into how much work of the progressive sound they pulled that would have make their debut album a sequel and make it very much a quintessential album from start to finish.
Now even though the band has gotten into a good start thanks to their work from the cult prog rock heroes, Karntaka, the music is still there and the technique is spot on how the band are definitely getting the attention they deserve from the independent music scene and a little help from Classic Rock Magazine writer, Jerry Ewing. The inclination of the female music scene in the symphonic treatment with; Magenta, Renaissance, The Reasoning, and Within Temptation, not from your own word of mouth to create a huge scene from the New Wave of Female Prog scene of the 21st century. Now with the mainstream media being so fucking stupid trying to get in Rolling Stone Magazine and showing a sexy look like a drugged up Hollywood star of being the next big thing since the Beatles, is not going to cut it. And you get the idea that why it’s been difficult in the music business to get other band members to do other project, does it hurt a lot?
Enough said, now if Panic Room won’t get the recognition they deserve in the Prog Rock scene where the bands might use, if they use a musical manner stand together rather than hide in the closet. Satellite is an okay album, now some fans might love or hate the sound which could have worked better on the first album, listen to it three times would make their second album a process act one and act two rock musical.
Freedom to Breathe, starts the album off with a guitar introduction in a riff style that’s similar to Grand Funk’s I’m Your Captain meets The Beatles I Want To Tell You, becomes very layered as Paul Davies does his Gilmouresque guitar sound, which makes the process to stabilize the beginning of the album, as the riff gets the listener’s attention, along with Anne’s vocals singing about being a strong person, sets the entire album to make it very stronger and kicks plenty of ass. Picking Up Knives is a sequel to the opening track and as for I Am A Cat seems very much of a reminiscent of Alternative Rock version of Radiohead of Cats lurking for mouse to eat and roaming around the city in the nightless sky while The Fall has a jazzy element of a ballad. More likely, the lukewarm crisp of the middle-eastern rock sound continues on Yasuni and the power chord shattering composition of Black Noise that is haunting and magnificent.
Panic Room are back with the love song technique with the calm acoustic ballad, Sunshine, as it shows Helder’s voice from a singer who would bring the stadium down to an angelic voice with mother-like sound that is filled with grace while Into the Fire and Muse has the delight of the Celtic Folk Rock sound. Dark Star is definitely stands together as the eerie Church-like Symphonic Rock sound in which Panic Room wants to conquer with as the closing 8-minute title track goes back into the Solar System boundaries with a keyboard that is paying tribute to Richard Wright and the Floyd-esque sound of the Meddle-era.
Now back with a powerful force as if they going back up again in Outer Space, it is up to Panic Room and Satellite to get the Spaceship going and the word of mouth they deserve.
Posted by znathanson at 12:05 PM