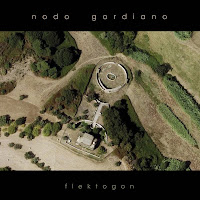 Bursting through the floodgates out of Italy with their third album, released last year are these four members who are what I consider new wave of Italian Prog Rock, Nodo Gordiano. How do they capture the spirit of the Italian scene of the ‘70s and give the recognition it deserves really importance for this band, but they are staying true to its roots by giving it a twisted mechanism is quite interesting, but with Flektogon, there isn’t any lacking with ambition and atmosphere.
Combining the mix of Middle Eastern sounds, Edgard Varese, a crossover element of art rock meets weird mass madness – imagine if you will Rush performing with Banco Del Mutuo Soccorso and King Crimson – Flektogon takes the listener to a world of unknown worlds, different time shapes, opera rock of theatre, with the band doing a lot of work to the credentials.
You might be thinking how a cover band paying tribute to their heroes of prog, started to create their own music as a testament to give it a clear view on how the sound must be important and giving it the eye of a musician’s point of view with great coolness. Bass and Guitar are dynamic during the opening orchestral avant-garde turned haunting opening introduction, Theatro Di Memoria, as vocalist Silvia Scozzi is doing a soprano high voice ala opera style to get the band in a darker mood with a volcanic occurrence of steam altitude that sets the tone throughout the rest of the album. As the outbreak symptom introduction magnetism like the lava erupting through the steamy ocean, they go beyond the darker elements in the tribute to the Frank Zappa motive style of chamber music of Ozymandias Part I which is a short instrumental number which has a lot of percussion and then crashing down into madness.
The 30-minute epic Avventure Di Mastarna, which is really 30 minutes mind you,
it’s very capable by giving it exerting power during the opening is fully a three dimensional journey of the amazing composition. You can definitely hear the King Crimson influence on this track, and you can definitely hear the production of the members doing something quite magnificent. It has the heavy factor and then it calms downs to give it the PFM technique. Jazzy elements meet the Egyptian sounds for this sinister section. And then the last 2 minutes is them jamming away into the night with the ambient mood is very spasmodic as the synths, bass, guitar, and drums drive away into the night to close the piece up.
Ozymandias Part II is back again with the percussion by making it very much an African Militant tribe for a while and then the drums come in by giving it a drum roll on the snare tom-toms and the cymbals by going through a Mike Oldfield Ommadawn sound to Bill Bruford meets Mike Portnoy meets Neil Peart styling on the drums along with a ambient guitar solo. And the finale of the album, Zeitgeist (Hope’s Theme), with a heavy walking bass line along with an escort of the drums done by Carlo Fattorini and Andrea De Luca paying homage to Robert Fripp on the guitar. It’s very high voltage that makes the music very interesting to get your hands onto. It gives it the touch of electric values to the composition, but a little bit of the Mars Volta with a lot of heavy guitar sounds that gives the structure it finally deserves. I’m extremely pleased with Fllektogon because of its experimental rock sounds and the concept of prog not dying after all and giving the golden touch it deserves the flaming fire growing and not burning out.
Posted by znathanson at 10:00 PM