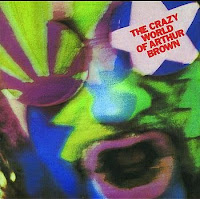 Although it’s gone through various re-masters since 1991, only now the only debut album from The Crazy World of Arthur Brown finally has got the 2-CD deluxe edition treatment from the help of Esoteric Recordings. And although this album had put Arthur Brown on the map with his infamous flaming helmet, the terrifying make-up, and the bizarre costumes including the silver mask he wore onstage to scare the shit out of audiences in the late ‘60s, he is definitely the king of Shock Rock and the god of hellfire. The 2-CD set features liner notes done by Classic Rock Magazine and Metal Hammer writer, and DJ for Total Rock, Malcolm Dome who also interview Arthur, along with the original artwork, pictures of the band performing including a young Carl Palmer (ELP and Atomic Rooster fame) and Vincent Crane, is just as bewitching as the music is therefore emotionally overwhelming.
42 years later, this album still packs a punch on which the band was the first beginnings of Progressive Rock. The band consisted alongside Arthur Brown on vocals, organist Vincent Crane, bassist Nick Greenwood, and drummer Drachen Theaker. The two including Crane and Greenwood had achieved status with Atomic Rooster and Nicholas Greenwood, but this debut album still represents Arthur’s cult following, as influential among its supporters including; Alice Cooper, Kiss, Prodigy and Marilyn Manson as much as it was to be considered the dark psychedelic rock album to come out of the underground scene of the late ‘60s.
The album kicks off with the eerie jazz psych freak out, Prelude/Nightmare. In the number, the late Vincent Crane is doing a lot of heavy organ solos as the piece becomes dramatic and climatic to give it a dazzling effect while the Fanfare/Fire Poem which is Arthur’s narration of the hit single. It seems that as if Arthur is giving a sermon to the lord our savior as he sings the segue twisted mind-fucked taste of tempo changes mixed with R&B/Soul with the titled track. Come & Buy acts as a calm after the storm with a feel of sinister touches, but you can tell Arthur is not stopping his screeching and screaming vocal arrangements as the late Vincent Crane follows him to give a tone of heavy solos on the organ while Time/Confusion is a haunting song in the mind of orchestral meets jazz fusion with a stimulate music arranging, while the album is strong as it is along with Nick’s bass work and Drachen’s drum work, is very hell-like, but you are inside the mind of Arthur Brown. Now with the 12-bar blues jazz take of Screamin’ Jay Hawkins classic, I Put a Spell on You, while it’s a blues classic, Arthur brings the house down as Crane helps him out to make it one of the best version of the blues to give it a real kicking ass number.
Spontaneous Apple Creation is a fucked up number, a weird and beautiful song with narration and Theaker’s drumming the brings the speed racing sound of the drums ala Jazz style. The song is weird, but it’s a space trip to go and see the Apples being spontaneous. Rest Cure is very poppy whilst I’ve Got Money is very twisted with Jazz Blues Rock, now if you imagine Coltrane playing this number with Brown, it would be an excellent collaboration with Arthur’s vocals, the bass doing some heavy walking solos as for the organ taking us up on the rollercoaster rides, a magnificent number on how this band were way ahead of their time. The closing 7-minue epic, Child of My Kingdom, is full on blues again to give it a magnificent jam done by the band, now since I don’t want to give away how the album ends, but it has an amazing ending and Crane is on fire along with Nick’s bass lines of Jazz’s take of Monk meets Hawkins. Now if you think the album was over, guess again.
The second CD features A & B sides, Stereo/Alternate Mono Mixes, BBC Sessions, and a film version of the eerie opening number. It begins with the two jazzy rhythm of the dark psychedelic numbers of Devil’s Grip and the quirky sense of humor of the hippie revolution, Give Him a Flower. Meanwhile, Music Man is back to the darker territories as if Screamin’ Jay Hawkins is helping Arthur Brown produce this emotional piano ballad to give the guts it has to push out of the tunnel as the half-sped first version of Fire could have been released as a single. The alternate mono mixes of the first five tracks are very interesting to hear in its mono glory including a female narration before Brown give’s his reverend sermon of the poem on Fanfare/Fire Poem and the title track also along with the eerie Come & Buy while the mono version of Time/Confusion shows a little bit of the original stereo mix, but it has the symphonic qualities that took me by surprise from start to finish. After an interview with Brian Matthew, The band is fierce with this early sessions from the BBC performances. As the film version of Nightmare, which was taken from the short film, The Committee, released in 1968 which featured music by Pink Floyd, is at its rawest moments.
Interesting to buy? Test the god of hellfire and take the magic carpet ride and we’ll who’s laughing now.
Posted by znathanson at 12:15 AM