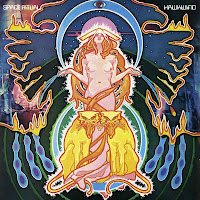 “I would rather the fire storms of atmospheres/than this cruel descent from a thousand years of dreams/into the starkness of the capsule.” The views of a new world through the mind of Robert Calvert and The Awakening is a huge surprise and it’s one of those amazing moments that will blow you away that is found on the double live album of eerie Space Rock or Space Metal to be precise that is damn perfect and spot on to be the angriest live albums to come out of the 1970s.
The band at the time was performing material on what was to be their third album of the follow up to In Search of Space with Doremi Fasol Latido. They recorded these performances in two venues at Liverpool Stadium and Brixton Sundown in December of 1972 in what was their Space Ritual tour in the UK. Already having a hit single in the can with the proto-punk of Lemmy’s vocals with Silver Machine, the artwork which features Miss Stacia and having a sci-fi background, wasn’t just a concert to be recorded, it was a moment that the stoners in the audience would soon be blown away by this unbelievable band to come out of the Ladbroke Grove freak scene to come out of the late ‘60s.
The late Robert Calvert, who was best known for his poetry and spoken word credentials, definitely was looking for a Sonic Attack to the raw sound while Dave Brock’s guitar work and vocals is as heavy as it can be. Meanwhile, Nik Turner’s jazz orientated on the sax by giving it a sneering sound as for Lemmy’s bass pounding away and Simon King’s storming drum patterns makes it perfect to the view of being lonely in space and making no contacts to the earth. The band may have been looking at the Solar Systems to decide which planet to perform that would make a run for their money, but with songs like; Orgone Accumulator, Brainstorm, and Lord of Light were the early sounds of hardcore thrash meets space metal. Alongside the three tracks, there are some aboriginal rock and roll tracks that would send the stoners into full mind-fucked trances.
With the likes of the speed metal sound with Born To Go, the eerie dalek ballads of Down Through The Night, the 28 second guitar work of Space is Deep, and Seven By Seven, the poetry from Calvert with 10 Seconds of Forever and the countdown to nuclear holocausts with Sonic Attack, they have a perceptual input to have a sudden intense of sublime beauty. The closing tracks with another fast-car refuge of the 7-minute live version of Master of the Universe and the calm and shredded hell of Robert Calvert coming back in to welcome life forms to a new world with Welcome To The Future (listen to it and you’ll enjoy a horror ride that you’ll never forget in this extreme terror to live through from start to finish).
The bonus tracks which featured their performance at Brixton shows there is no stop sign for Hawkwind with the 6-minute pounding thanks to Dave and Lemmy’s chugging on guitar and bass along with Simon’s drumming that gives it a run for the money with You Shouldn’t Do That, and the 13-minute trip of Born To Go is as magnificent as the hell in space couldn’t get much better than this.
Space Ritual is an avid favorite among Hawkwind fans including Jarvis Cocker, Henry Rollins, Johnny Rotten, The Clash’s Joe Strummer, and Black Flag to name a few. So if you are ready for the danger, be ready with Hawkwind and be warned when you ride with them to the terror that you are about to endure for the rest of your time.
Posted by znathanson at 8:46 PM