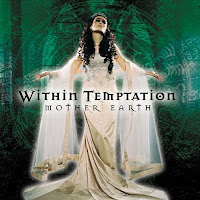 For this band, they are the next generation of the New Wave of Symphonic Power Metal, and having a huge success in Europe and refuse to be knocked down, Within Temptation are definitely the King and Queen of Neo-Classical Metal albums that should, in a 15th century way, that would make them the Beauty and the Beast of Female Hard Rock bands to come out of the woodwork, rather than being considered an Emo band, which they are not, they’re Metal to the Symphonic core. Featuring heavy mind-boggling songs and piano balladry with a Sonic force, Mother Earth is the Netherland’s most Progressive Metal albums to come out of the decade of the noughties.
The album has a lot of the operatic rock values thanks to the angelic vocals of Sharon Den Adel and the twin guitarist that would have made Glenn Tipton and KK Downing blow out of their minds of the twin guitar arrangements of Robert Westerholt and Michieal Papenhove while the drumming sound of Ivar de Graaf is the perfect combination of Neil Peart and Mike Portnoy, as for the bassist Jeroen Van Veen he is pummeling the bass like a bullet train. But this band is the shit right here. The album is almost a soundtrack that could have been a Celtic Rock Opera version of Lord of the Rings and that would allow Within Temptation wanted the sound to be older and knowledgeable according to Sharon, but make it more of an alternate soundtrack to Mel Gibson’s academy award winning film, Braveheart. The songs here shine a light with epic-like up tempo rhythms including; The Promise, Caged, Ice Queen, and the emotional titled track, feature a symphony orchestra, dynamic time signatures bright up the stars with tension boundaries and very dutch-like classical ambitions.
Alongside the four tracks, there are four centerpieces that would send goosebumps throughout your whole body. The two colossal of quintessential pounding rhythms which could have been a hit single is the homage to Rick Wakeman’s conceptual take of Journey to the Centre of the Earth with Deceiver of Fools and the homage to german composer, Richard Wagner as if he was to make Rheingold into a Symphonic Metal Rock Opera style with the 8-minute epic, The Promise, which to me, could have been the song for the anime classic, Record of Lodoss War. On Dark Wings, vocalist Sharon Den Adel sounds almost like Renaissance’s Annie Haslam, Magenta’s Christine Booth, and Kate Bush in a weird but interesting way, but the band are really going at it. Throughout the midsection, Westerholt and Papenhove all of a sudden do a guitar battle between each other, un-fucking-believable right there and then Sharon closes the number as she gives one of her high notes as the band closes with a haunting boom! The closing number, In Perfect Harmony, is their homage to the Celtic Folk scene in Wales as if they recorded this in the forest similar to the land of elves.
With the acoustic fingerpicking classical style, they move away from their power roar into an almost closing of a musical play as Sharon sings about peace while the guitar solo comes in to give it a calm of the storm. It is so lukewarm and calm, that you really need to get Kleenex to enjoy a nice cup of tea to hear this song for enjoying the perfect harmony, if you are a metal-head to enjoy a cup, please for god’s sake do. There isn’t any nagging excuses from start to finish, Mother Earth is one of the most worth listening to Within Temptation’s career with some amazing arranging and composition’s. Since you are a die hard fan of the Symphonic Metal-era with female vocals, this here is the starters right here.
Posted by znathanson at 10:20 PM