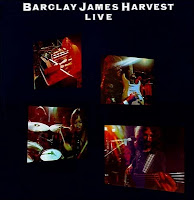 After BJH were dropped by Harvest Records in 1973 and moved to Polydor Records in 1974, it was time for the band to do their first take of a live album. It was released as a double album at the time they were promoting, Everyone is Everybody Else. They recorded these performances at London’s Theatre Royal, Liverpool Stadium which Rare Bird opened for them, which in the liner notes features a ticket stub for 88p, and Drury Lane. The band was having a hard struggle because of a debt to EMI along with a disastrous orchestral concert with help from Robert John Godfrey who would later become the leader of his own band, The Enid.
Also, already a target for music critics as being considered a “Poor Man’s Moody Blues” tag they had to face. But they knew they could not back down without an album that was the biggest selling record to reach number 40 in the UK album charts and drawing increasing numbers to be their first charted successful records in Progressive Rock history. Live definitely offers the listener a front-seat row to hear the band perform in all of their glory.
Beginning with the two 10-minute live epics of the atmospheric glory of Summer Soldier and the space traveling rocker of dramatic tension with Medicine Man, which features a floyd-tinged guitar and mellotron sound done by John Lees and Woolly Wolstenholme while the late Mel Pritchard is pounding away on the drums to give it a huge glorified sound on the drums to give it that Outer Space adventure in an homage to Arthur C. Clarke. Crazy City has the elements of the Who meets a Space Rock version of Canterbury’s Caravan as for After the Day has a warm and Genesis tone is built around Woolly’s keyboard sound and Les’ firm bass lines while John Lees is fingerpicking on the guitar to give it that calm breeze for a whole view after the apocalypse of the only survivor that stands on the planet earth. And then it gets really astonished with a lot of goose bumps of the live version of The Great 1974 Mining Disaster.
On this beautiful live version, the band are coming together as one as they bring the number to a glorified production of this emotional song paying homage to the Beatles A Day in the Life and the Bee Gees New York Mining Disaster 1941 as they sing about Mister Groan being an outsider after what had happened to his policies and couldn’t stand the thought of being arrested again. As for the Tolkien-inspired beauty of Galadriel almost could have brought the audiences into tears, the blues-funk values of Negative Earth is very raunchy and down to earth while the breath-taking chiller of She Said is mind-boggling. The ambient live take of Paper Wings, about a suicidal man who doesn’t have a dream, but wants to fly to escape his views of hell.
The closing live number, Mockingbird, definitely is one hell of a track and is a fan favorite among BJH fans as it becomes intense, emotional, and dramatic interplay than the original studio track as they come to give the fans what they want to hear. Their only take of a Live album is a masterpiece, capturing them at their peak and definitely one of their magnitude and power they capture of Live and the parts just keep on going.
Posted by znathanson at 3:12 PM