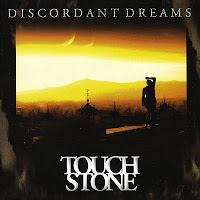 Now I must admit, listening to new Progressive Rock bands is really quite interesting to hear. That and this new band coming from Hertfordshire is worth the wait. Touchstone, who formed in 2001 by keyboardist Rob Cottingham who released his debut album in the noughties, decided to get a band together which featured; Vocalist Kim Seviour, guitarist Adam Hodgson, bassist Paul Moorghen, and drummer Alasdair Melville as the band released their EP four-track album, Mad Hatters. The EP definitely received critical praised and soon the band began to record their first album simply called, Discordant Dreams.
Released in 2008, the album especially accepted Touchstone’s sound to create a Progressive sound. You definitely can imagine that the band were in the studio, listening to Dream Theater and Led Zeppelin as much of the time listening to Van Der Graaf Generator, Premiata Forneria Marconi, Yes, and Marillion. Alongside their Neo-Prog characteristics, Magenta and Spock’s Beard, it’s quite blown away that the male/female vocalist concept helps out a lot and while it sounds most of the time Symphonic and Hard at the same time, they bring a lot of energy to the table of Touchstone’s career. There’s another band that would have made Touchstone’s sound and feet tickled is Chicago’s answer to Styx, Starcastle, the sounds and the recording are definitely similar along with the bass line done by Moorghen while Seviour and Cottingham’s voice are almost a hard rock version not to slam the Symphonic Prog treatment.
The album begins with the eerie 1-minute introduction as it segues into the dynamic title track. When you hear this number as the guitar kicks in the high gears, the listener is inside a beautiful atmospheric dreamland lyrical background. The sound is unbelievable in a big way with a melancholic beauty along with a great midsection that Hodgson’s guitar work is very producing a thunderstorm, and the solo is very much a little bit of Michael Schenker’s-era of the UFO period. Now throughout the rest of Discordant Dreams, Touchstone has the melodies cooking up and always wanted to make sure they don’t screw up. Curious Angel is very, a crisp power rock AOR sound in the song as See The Light has that ‘80s mind-twisted vibe of the sessions of Journey’s Escape meets Genesis Abacab. Being Hannah is a perfect masterpiece example of the five-piece working with one another and having a great time performing together and knowing that the Prog Metal/Rock sound is staying true to its form.
The 6-minute number, Shadow in which is a great centerpiece because it’s Kim’s turn to shine the light of Touchstone as she delivers the punching bag on the vocals. In the number she does some high arranging on her voice while the guitar done by Adam is very explosive as he starts with the Pomp sound into a territorial view of hell in the midsection with the Moorghen’s bass paying homage to Geddy Lee as the other instruments takes the listener on a roller-coaster ride of a life time before sending it to the heavens with satisfaction guaranteed chorus. Ocean Down is a piano ballad short number with Seviour and Cottingham doing a duet together while Blacktide is a Hard Rock anthem to a Neo-Classical version of Renaissance.
Dignity starts with another melancholic number with a strong force with the lyrics as Paul’s bass line does incredible bass line as it leads up to the 11-minute epic, The Beggar’s Song. Though it’s very much a tribute to Lewis Carroll and extended, it’s potential, beautiful, and emotional that would make Touchstone a household name. This is deintely a must have in your music collection.
Posted by znathanson at 10:21 PM