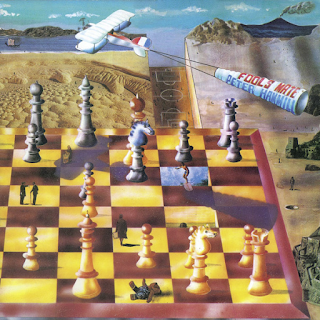 While he carried the sound and the vision behind the sound of Van Der Graaf Generator and receiving cult status with albums including; The Aerosol Grey Machine, The Least We Can Do Is Wave to Each Other, H to He Who Am the Only One, and the darkest masterpiece, Pawn Hearts, Peter Hammill is for me, one of the most overlooked singers in the history of the Art Rock scene in the 1970s. During VDGG’s heyday, Peter wanted to do something that was beyond the band’s career at their peak. He wanted to do simple shorter songs.

That and his first solo album, Fool’s Mate, a calming, evocative, and spiritual album that he unleashed, but he still carried the VDGG sound in there to give it more of an alarming, eruptive, yet hypnotic debut that is ready for lift-off. Originally released on the Charisma label in 1971, which was home to Lindisfarne, Rare Bird, String Driven Thing, and Genesis, Fool’s Mate is a staggering gem that just makes you wonder, how the hell does Hammill do it?

Well, you have some friends including Robert Fripp of King Crimson along with Rod Clements and Ray Jackson of Lindisfarne to lend Peter a hand on some of the tunes that are at times humorous, dalek, twisted, balladry, and joyous, he can take the listener into a strange new world that he or she has never seen before. Songs like the waltz-like dance organ upbeat on Happy and the tribute to the Victorian-era of the late 1890’s on Sunshine has this odd homage to Gilbert and Sullivan with a Salad Days sound featuring jazzy sax beat and a swirling wah-wah guitar solo.

Then, he goes into the surroundings of David Bowie’s Hunky Dory-era which I imagined he listened to during the sessions for his solo album on the acoustic yet laid-back calmness on Child and Candle while he goes into the Acid Folk fuzzy atmosphere that he could have recorded at a dark and cavernous place on Solitude in which he sings about a person going through the early stages of having a nervous breakdown by trying to get away from the real world with lyrics like “Out here, Life Is At its Essence/Watches the World with Innocent Eyes/Far from Grime/Far from Rushing People it seems That I have Found a Tiny Peace.”

Meanwhile, he’s at the piano for a ballad that resembles the chord introduction on Whatever Robert Would Have Said on Vision and you can tell Hammill is taking a break from the heavy material to take a relaxation as he goes into a joyous introduction featuring a loud alarming keyboard note before going on a trip on his Imperial Zeppelin. It has the upbeat psych-swinging grooves, operatic organ-like movements in the midsection with his wailing and dooming, calming voices that he improvises, sax riffs, and Hammill having a blast on this piece that almost could have been a hit single.


And then, the tension level increases on the closing yet mourning piece with him on guitar and singing that has this Edgar Allen Poe inspired lyrics on I Wrote Some Poems. He calms for a minute and then strums loudly by singing and its just thunderous, that you can tell something special is happening on here. Still after 43 years by the time it was released, Fool’s Mate is an unsung masterpiece that Hammill has brought to the table.
Posted by znathanson at 9:56 PM