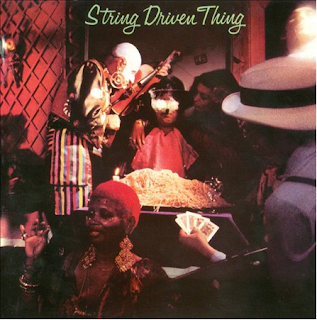 When people think of Folk, they think of: Joan Baez, Pete Seeger, and Bob Dylan. And their names have been explained over and over again, but there is one band from Scotland that always had a touch of the coolness, darkness, and powerful experiences that you’ve never heard before. That group is String Driven Thing. Since their formation in 1967, they started out as a trio with two guitars and a tambourine founded by husband and wife duo Chris and Pauline Adams and John Manion, they moved away from the folky sound into something as I’ve mentioned before into darker territories and surreal beauty that has never been done before.

Their two albums (String Driven Thing & The Machine That Cried) are a mind-blowing experience from start to finish. Originally released in the Charisma label in 1972 and 1973, and reissued by the good people from Esoteric Recordings, this is a special treat if you want to go inside the different Progressive Folk scene and shows that the Folk genre is not just a four letter word. Alongside the Adams family (no pun intended), it considers Graham Smith on violin and Colin Wilson on Bass along with Bill “The Kid” Fairley who played drums on their third album.

Beginning in 1972 with the release of their second sole self-titled debut album in which they brought along Shel Talmy, who’s known for his work with The Kinks, The Who, and Pentangle to name a few as a producer, it was a match made in heaven. What really surprise me away about String Driven Thing, is how Chris Adams can really sing very well and a good screamer as well by belting it out while Graham comes up with these shrieking yet calm-like moods on his violin and Pauline helps his husband out by singing along by giving him a helping hand.

Songs like the shuffling funk yet bluesy rocking out powder keg with a lot of force on My Real Hero as they go into town by dealing with how God doesn’t play in a Rock & Roll band as the balls-out intro Circus that features a heavy guitar driven riff, pummeling tambourine, and a cool bass line, the lyrics dealing with the childhood memories inside the Tent and seeing the dangerous animals, clowns, and the dangerous stunts that the performers have to do on the tightrope, you can tell how this is a good way to start the album off with a bang.

Then, there’s the catchy melodies including Hooked on the Road & Fairground in which they capture the beauty of Graham’s violin in which he goes from this country-tinged sound into an upbeat surrounding that would become the String Driven Thing sound as Pauline goes into this soothing calm-like vocals on the second track as Graham and Chris come up with down-home driven beats on their instruments.  The waltzy ¾ time signature on the ballad, The Last Blue Yodel, has this wonderful homage to Fairfield Parlour as Chris’ voice reminisces of Peter Daltrey while they go back into a psychedelia blues shuffle into the heavy rock mode on Let Me Down as the violin becomes a Hendrix-like wah-wah solo.

The closer, There You Are, has this whimsical yet romantic dance-like number as the band dealing with a song about a man’s love toward this girl who has dreams and can’t stop taking their eyes on the person he loves so much. It’s a beautiful track and a great way to close the album off with a wonderful tribute to Harry Nilsson’s earlier days in the late ‘60s. 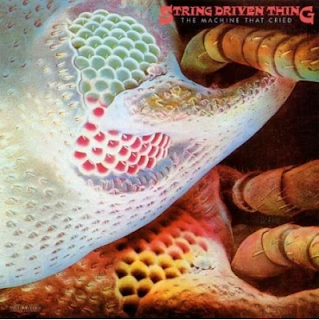 The follow up, The Machine That Cried, released in 1973 is where everything comes at the right time at the right place. Even though it received mixed reviews at the time of its release, it is now considered a lost classic as they went into a heavier and evil mode and Chris was suffering through depression and had a collapsed lung at the time of the recording sessions were made of their third album, and still after 40 years after its official release, the album deserves recognition.

Opener, Heartfeeder, starts off with Graham’s nightmarish violin intro as it goes through a set of motions before Chris’ voice kicks in and then it becomes a whole new level. His terrifying vocals sends shivers down my spine as you can imagine the band going into this sinister upbeat tempo  as Colin Wilson creates some evil walking bass lines to set the mood before going back into the climatic finale with a silent dramatic ending.

To See You has this Dylanesque beauty as it almost was recorded during the Nashville Skyline sessions while they go back into full gear with harder edge into the shuffling rock mode in the groove on Night Club. Then Chris shines again with his vocals as Graham and Pauline help out with the eruptive yet evocative touches on Sold Down the River. Listening to this, you can feel his pain from his singing as the violin sets the atmosphere and the drumming helps the powerful touches to get the scenery and it’s a shrieking and touching moment on the composition.

Then, it’s a revisit to the ‘60s with a Hendrix-like sound as Pauline takes over on vocals with Two Timin’ Mama. It has these touches along with Hendrix that Chris does on the guitar and bits of Richard Thompson’ work as a bit of a tribute to the man from Fairport Convention and it is a very moody piece on being lost now in the future and not thinking about the past. The calm after the storm becomes a lukewarm sunny afternoon as they take a break from the electricity into acoustic ballads on The House, Travelling and the vivid People on the Street.

And its back into the haunting mode again with the title track, which almost sounds like something straight out of a Ray Bradbury short story, but it’s the dramatic level that really kicks in as both Chris and Pauline sing together as like a duet on the piece while Graham just goes to town to give it a huge notch and the rest is a pure adventure. The closing 11-minute epic, River of Sleep, is a spiritual yet disturbing composition.

There are movements that are; soft, evil, experimental, spacey, dreamy, and terrifying. And what they do is a spellbinding twist to come up with various genres to give you the chills as they Graham Smith himself a chance to shine to improvise as he challenges Darryl Way for the tension level to set up the variations for someone by going through a nervous breakdown. And it’s a perfect closing piece to close the album and the curtains to go down for a thunderous applause.

The bonus tracks are singles that appeared at the time they were promoting the album. You have the uplifting song on how everything’s stage for lovers and fools on It’s a Game, then it’s a roaring volcanic stomping on becoming famous and the price that comes with it by remembering the past on the ‘50s and ‘60s with Are You a Rock ‘N’ Roller? Not to mention a powerful organ sound while they go into  the Prog Rock sound and bits of Glam Rock in there with the stomping I’ll Sing This One For You by challenging Slade and Pavlov’s Dog.


The liner notes are spot on as they are done by Sid Smith who’s best known for his writing on King Crimson and this one features an interview that he did with Chris Adams. It’s a history on how the band came to be and during the making of the albums and he has done one hell of a job researching and for Chris remembering the good old days on String Driven Thing. Ahead of their time, the band is one of the most true and underrated pioneers in the history of Progressive Folk.
Posted by znathanson at 11:26 AM