The Avengers - On A Mission 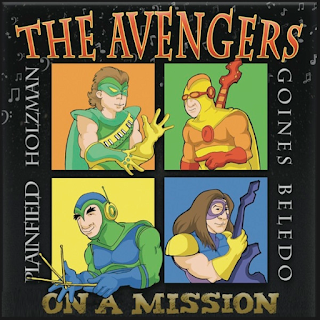 This Jazz-Rock quartet from New York City takes a lot of sound and vision of the world of Fusion like you’ve never heard it before.  Their music is very laid-back, soft, soothing, mellow, balladry, and dance-like from beginning, middle, and end. Taken their name from the Marvel Comics universe, The Avengers plays their music like a soundtrack to the Big Apple which makes you feel right at home as you go through the streets and remembering the good times you had in the city as a child growing up that makes you feel safe and sound.

Uruguayan guitarist Beledo, who is almost is for me, Jazz Rock’s answer to Leopold Stokowski and John McLaughlin on the guitar as a conductor and leader of the group, takes his playing into various movements and holds the band together like walking through a tightrope and holding on to their lives to see where the musical compositions will take them into. Then there’s Adam Holzman, who is on tour right now with Steven Wilson promoting The Raven That Refuse to Sing, using his Fender Rhodes-like sound on the keyboards and the Moog, creates a lot of swarm and moody sounds on the instruments that will take you into different dimensions.

Drummer Kim Plainfield and bassist Lincoln Goines, create some mind-blowing passages and incisive wonders between the rhythm sections that will have your jaws dropped when you expect the unexpected.  There are some amazing atmospheric arrangements that are enduring four highlights from On a Mission. After All begins with a layered guitar and bass melody line that Beledo and Goines do while Holzman gathers some soulful Rhodes and Organ sound as they soar into the heavenly skies for some fantastic receptions as Beledo just takes it down the highway as Holzman creates some Herbie Hancock touches for a hypnotic solo.

Portia begins with a haunting synth-like introduction and it has some classical elements in there with soothing guitar beats and vocalizations that makes this band worth listening to. You have to admit, there is a lot of magic and creativity behind the four members of the group. Meanwhile, Rauleando has some heavy inspirations from The Mahavishnu Orchestra’s Inner Mounting Flame-era and King Crimson’s Red-era in there as they go into some Prog-Funk movements with some jumpy and spacey sounds as Exactly, goes into this 1980s fast-driven turned expansive exercise beat that sees the band go into this massive car race to see who will win the Stanley Cup for best sound.

And then, there’s the opening title track. With touches of Weather Report and Return to Forever surroundings in there, it makes it a perfect introduction for the curtain to rise up. Lincoln is doing this mind-blowing bass lines in the style of Jaco Pastorious as Beledo creates some virtuosity as Holzman does this Jan Hammer workout on the keyboards to get going as Kim helps him out on his up tempo drum beats.

An amazing journey that is spiritual, innovative, powerful, and magical from the moment you put the CD on, and it’s an exhilarating experience.
Posted by znathanson at 5:40 PM