PTSD - A Sense of Decay 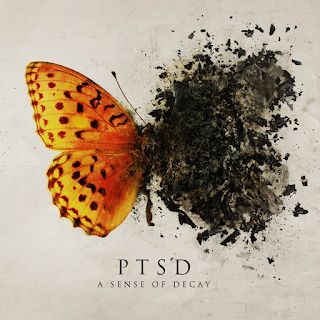 PTSD (Post-Traumatic Stress Disorder) is an Italian group from Grottammare, which is a commune located on the Adriatic coast of Ascoli Piceno which is a province. They have this alternative and metal feel in their sound as well. They have been around since 2005 after releasing their debut album, Bureploom and appeared on the soundtrack in the 2007 independent horror film, Am I Evil (named after the Diamond Head song) and won the Horror film festival that helped the band get some recognition in the states.

That and their new album, A Sense of Decay, shows a lot of power and a lot of hope for this band to deal with the issues on their namesake with anxiety disorders, flashbacks, nightmares, and taking your own life. It’s a difficult subject matter on the compositions they wrote, and it’s quite amazing for the group to really deal with the issue and how some of the people (including Soldiers coming home from Iraq), who are suffering from the anxiety disorder, are receiving help and trying to cope with it and it’s not an easy task for them to revisit the past.

The mellowing turned rapid guitar driven lines and thunderous drum beats on Suicide Attitude which almost sounds like something out of Black Sabbath’s Master of Reality-era, comes at you like a kick in the gut with momentum while the haunting and poignant surroundings on A Reason to Die and the electronic atmospheres on Staring the Stormwall with an acoustic turned uplifting background, soars into stirring momentum. Then there’s the energetic yet fast-driven tempo of Breathless where the snarling and calm vocals come in full swing and at times it has rumbling guitar lines in the rhythm section where both the instruments and vocals come together as one.

On Solar Matter Loss, it has this ‘80s vibe with a sci-fi futuristic dystopian universe feel and at times it has some elements of Queen’s latter days in the late ‘70s/early ‘80s while the opening track, Event Horizon, goes into the electronic/alternative rock vibe with some grooving movements on both guitar and vocals that sets the tone of the album. Parasomnia and By a Thread are both alongside the other tracks, another fast-driven compositions with thumping guitar lines between rhythm and lead that has some calm and relaxing movements before kicking into full gear with alternative metal going into overdrive.

Their take on Anastacia’s mellowing ballad on Heavy On My Heart which deals with her battle from breast cancer, is stunning with layered clean and heavy guitar lines as the vocals soars into the heavenly sky while …If? Has some of the Prog and Metallic structures with a lot of vibes to the mix as the closing track of Event Horizon in which it’s the “Forgotten Sunrise remix”, is sinister and haunting in this version that makes the piece almost a soundtrack to Ridley Scott’s 1982 cult classic, Blade Runner.

PTSD keeps the touches of Prog, Electronic, Alternative, and Metal true to the core and they have shown no sign of stopping. A mind-blowing album that is a big surprise from beginning, middle, and end on A Sense of Decay, they are about to really take their music into different levels and they keep it solid.
Posted by znathanson at 8:29 AM