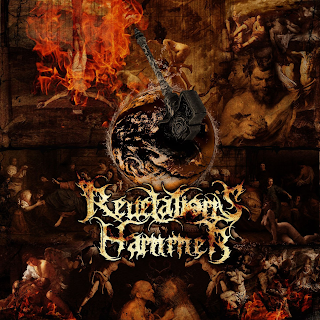 Blistering and Powerful sounds of Black Metal comes at you like a fast-speeding train going 600 miles per hour from this soon to be up-and-coming bands out of Norway with snarling vocals, thunderous guitar lines, and machine gun drum patterns. That group is called Revelation’s Hammer and they are as mind-blowing carrying the torch of the genre and following in the footsteps of Venom, Celtic Frost, and Morbid Angel.

With a cover that has of a Hammer smashing parts of Earth’s atmosphere and the cover almost resemble Dante’s Inferno done by Ricardo Ferandes from Portugese, it is epic, stories of betrayal, fantasy, horror, and almost as if the machine is ready for a full scale assault.  The band features Accuser on lead vocals, guitar, and bass, Myrvoll (Nidingr) on drums, and Exilis (Troll) on keyboards and it was recorded at Toproom studio where the controversial band, Mayhem and Borknagar did some of their sessions and let’s just say that Revelation’s Hammer have scored a knock-out with their sole self-titled debut album.

You have the opening 9-minute epic, Obsessed Onslaught that sounds like something straight out of Black Sabbath’s first album with the doomy guitar introduction before it ascends into a full chaotic nightmarish pummeling throttle. Then there’s the drilling title track and the balls-out Den Blåøyde (The Blue Eyed) that goes through this wonderful homage to the ‘80s Thrash Metal scene featuring Monk-like choir in the midsection that is jaw-dropping as they pay tribute to Slayer’s early days.

Buried as Filth feels almost like a Black Metal opera set during 1945 post-war where everything has gone down into a brink of destruction with someone going insane screaming in a mental asylum done with a lot of heavy energetic driven and pumped up sounds setting the scenery while Avgudsdyrkelse (Idolatry) in which it deals on worshipping the physical object of god as they take on the subject matter with a climatic-climax battle against heaven and hell that has a thunderous attitude.

Closing track, The Crown of Malice, is back into the Thrash/Hardcore Metal roots and where all the headbangers get ready to mosh on this mind-blowing epic. There are at times in which is an homage to early Metallica, Napalm Death,  and the occult Italian prog band, Jacula with the doomy organ lines done by Exilis before Accuser and Myrvoll go into this chaotic duel between guitar and drums as the spell-binding last few minutes brings a closure to drop the curtain for an enormous applause.

Revelation’s Hammer is one of the most explosive, yet dangerous bands I’ve listened to. Their debut album is soon going to receive word of mouth in the Black Metal community in different parts of Europe and maybe hit the big time in the festivals to see where the road will take them. A must listen to band for anyone who’s into Thrash and Black Metal.
Posted by znathanson at 1:45 PM