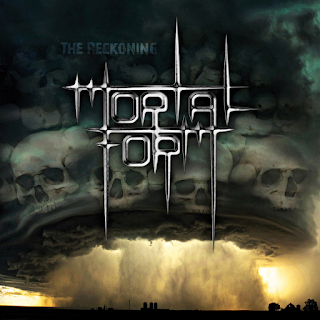 Death and Thrash Metal can be an interesting crossover as if to say either Metallica had teamed up with Mayhem with snarling vocals or Overkill teaming up with Celtic Frost with extreme results for the headbanger’s to mosh like crazy. However, one of the most extreme metal bands to come outside of America, is a group from the Netherlands called Mortal Form and they are surely to become the loudest and heaviest metal bands to erupt like an explosive volcano waiting to erupt and send a river of lava to reign terror in the big and small cities of Europe.

Following in the footsteps of Iron Maiden, Morbid Angel, Arch Enemy and dare I say the group Deathklok from the Adult Swim series, Metalocalypse, they have been around for about 19 years since their formation in 1994. The band considers Oscar on Bass, Bastiaan on Drums, Ralph on Lead Vocals, Teun and Vincent on guitar. Their fifth album, The Reckoning, is an earthquake and mind-blowing album from start to finish with rapid gunfire guitar lines, militant drum patterns, pumping bass, and snarling/roaring beast-like vocals that let the Metalheads know, that the genre is not just a five letter word.

The fast-driven pieces – At Fever Pitch, Apocalyptic Aftermath, As Nature Turns Evil (The Sleeper Awakes), and Storm Before Calm, feels as if the violent tornado has come back with thunder and its getting ready for a full scale assault on the towns with a lot of attitude and energetic vibes that is a rumbling earthquake coming out of nowhere that are absolutely jaw-dropping. Then there’s the 5-minute metallic mini opera about someone going insane on Dungeon. Here on this composition, they deal with the issue on who are they, revisiting their childhood and feeling like ages, and how they are still alive in the prison of the hellish nightmare they are living in.

Radiation Breath, which deals with the toxic Radioactive Waste and dying from the stuff after the apocalypse, sounds like something straight out of Slayer’s Hell Awaits and Reign in Blood-era that has the volume going up to 200 not to mention the crazy guitar solo in the midsection while the closing track, Sinners Repent, has this early resemblance of the Kill Em ‘All-era of Metallica’s Seek and Destroy, but with an attitude and a tribute to the Thrash Metal heroes. If the Thrash and Death Metal scene has been revived, then Mortal Form is certainly one of the bands to watch out for.

The Reckoning is one of the most vicious, sinister, and haunting albums I have listened to and this is the album to get ready for a lot of headbanging from start to finish and there is no stop sign of a band to get the blood and veins flowing inside them. It is a must have album and highly recommended to see where the road will take them into.
Posted by znathanson at 11:11 PM