Purson - The Circle and the Blue Door 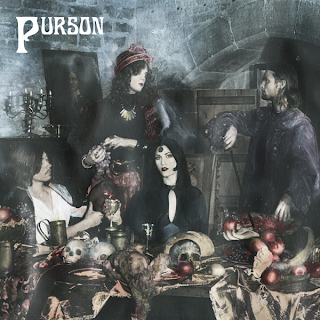 One of the labels I’ve championed since 2009 alongside KScope, MoonJune Records, and Esoteric Recordings is Rise Above Records. My introduction to them was from the very first issue of Classic Rock Presents Prog and Astra’s The Awakening was my one of favorite progressive rock albums to come out of that time period. And soon bands like; Orange Goblin, Cathedral, Electric Wizard, Diagonal, Ghost, and Doom-Prog band, Blood Ceremony in which they have a combination of Black Sabbath meets Jethro Tull, shows that this label have come a long way since the late 1980s founded by Napalm Death’s Lee Dorrian, who for me, is the Sherlock Holmes of obscure Prog and Doom Metal.

This year, one of the most promising groups to come out of England is Purson. This quintet is for me, one of my favorite bands after hearing their Rocking Horse EP. And now, they have unleashed their debut album, The Circle and the Blue Door. It has this very ‘70s retrospective rock feel in the realms of Prog/Psych/Doom with a combination of Black Sabbath, King Crimson, The Beatles, Julian’s Treatment, and the acid folk rock group, Trees, with a gothic twist.

Musicians on the album are; Rosalie Cunningham on Lead Vocals, Acoustic/Electric Guitar, Keyboards, and Percussion, Ed Turner on Bass and Acoustic Guitar, Raphael Mura on Drums, and Rosalie's brother William on Saxophone and Jester Duty. What is simply mind-blowing about Purson is how they would take the sounds of the three genres and just kick it up a notch by making an amazing experience to embark from the moment you put the album on and listen to it from start to finish.

Filled with soothing Mellotronic, Hammond Organ and Fender Rhodes-like sounds, hypnotic guitar lines that have a lot of heavy and folk-like structures along with Sabbath sound that comes along with it and Rosalie’s vocals that will send shivers down your spine from the moment she sings.  There are some amazing moments on the album that endures six centerpieces from The Circle and the Blue Door. You have the walking bass line, and the Spacey wah-wah feel from the acoustic guitar, and the keyboards setting the emotions on The Contract and the homage to Italian Prog group, Premiata Forneria Marconi’s Storia Di Un Minuto on the joyous and upbeat feel on Leaning on a Bear.

The eruptive and rumbling middle-eastern with a haunting and sinister beat to it on Spiderwood Farm, it has this heavy riff on guitar, bass and keyboard before Rosalie comes in hammering as it goes into a dark folky movement for a brief second and then it goes back into full swing and then back into that movement, it is such a killing track and feels like they could have recorded this piece for the Italian Horror Films in the 1970s.

The jazzy rock vibe comes at you like a breath of fresh air with a lot of tension on Well Spoiled Machine as it goes into this amazing groove in ¾ time signature between Bass, Drums, and Keyboards as they help out Rosalie get the vibes thumping by reminiscing Motorpsycho. Sailor’s Wife Lament which has this haunting waltz-rock vibe, feels very much like something straight out of Kurt Weill’s The Threepenny Opera as you can imagine Lotte Lenya’s character (Jenny) singing this at an abandoned bar with a wonderous jaw-dropping approval.

And then there’s Rocking Horse. It features some delay and reverb surroundings on the guitar and some lukewarm crisp on the 12-string acoustic guitar for the introduction before Rosalie comes in as she sings “Look, here, picture if you can/an old photograph in my hand/Gaze in, remember if you can/Hazy days, far- away lands.” And then the band comes in with high spirits as they go into this Beatlesque ‘60s touch that just takes you by surprise by going into different voyages in the midsection.  Unexpected and out of the blue, it is a killer.

I have listened to The Circle and the Blue Door about 12 times already and I’m completely hooked into the music and Purson have scored a homerun with their debut album. Even though it’s their first, and receiving word-of-mouth in the underground circuit, they are soon going to become one of my favorite bands in the revival of the Prog and Psychedelic community. A must listen-to album for 2013.
Posted by znathanson at 5:53 PM