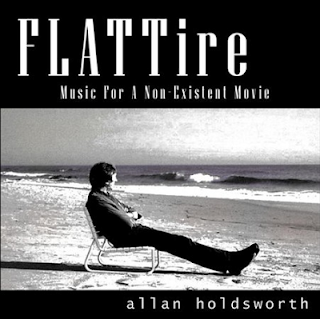 Allan Holdsworth, is perhaps one of the most overlooked guitarist in the Jazz Rock scene. He’s probably best known for his work with; Soft Machine (Karl Jenkins-era), ‘Igginbottom, Nucleus, Tony Williams, and the earliest obscure heavy metal short-lived trio, Tempest.  He is ahead of his time alongside John McLaughlin, Al Di Meola, and Bill Connors to name a few to really take the guitar into the voyages of the passages of both time and space to boldly go where the genre of Jazz has never gone before.

In the mid ‘80s, he used an instrument called the SynthAxe, which was a MIDI software guitar-like instrument that would produce sound by using his arm to play notes on the neck resembling the instrument in different usage that Allan himself did with Atavachron in which it was an homage and a tribute to the original Star Trek series back in 1986. Then, eleven years ago, where he would create this moody atmospheric new-age sound with 2001’s FLATTire: Music For a Non-Existent Movie.

The album was out of print for a long time until MoonJune Records this year has reissue it and from the moment you put it on, you could tell that Allan himself wants to give the New Age sound, by adding a touch of the Jazz genre up a notch. Listening to this, it’s almost a one-man guitar show and featuring Dave Carpenter on acoustic bass on two tracks, he would come up with some smooth lines to help Allan out with the swirling beauties that he would come up on the SynthAxe.

At times, it is a tribute to the Hyperborea-era of Tangerine Dream and bits of Wendy Carlos in there to give this ‘80s vibe on the sound as you can imagine some of the compositions could have been a part of the Atavachron sessions. You have to understand, Allan is a conductor and composer, so the instrument that he’s playing, he’s playing the bass, strings, sax, keyboards, and orchestral choirs that would fill the entire setting into that one MIDI instrument, that would have your jaws dropped when controls it to see where he would take it to next.

It almost as if he was writing the score to some of the PBS shows like Newton’s Apple, NOVA, Long Ago & Far Away, and Square One. It goes through a spiritual journey like walking through various landscapes set to a dazzling electronic score to fast-upbeat moments, haunting, and emotional themes that makes Allan, a mastermind through the soundscapes. All in all, FLATTire, is a hypnotic, moody, and quirky electronic jazz adventure like you’ve never heard it before in the mind of Allan Holdsworth.
Posted by znathanson at 10:57 PM