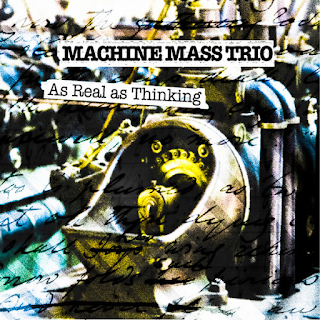 It’s hard to imagine hearing music from a different part of the world and listening to the sounds of Avant-Progressive Rock and Jazz Rock at the same time and knowing that this something worth exploring by opening the door and seeing what is inside that closed door. One of the bands that I’ve discovered is a group called, Machine Mass Trio from MoonJune Records and a few others to be worked on later during January and at the end of February as well, is to understand that Prog and Jazz aren’t just four letter words.

The band features two members from douBt featuring Tony Bianco on Drums and Percussion, Michel Delville on Guitar, Bouzouki and Electronics and Jordi Grognard on Sax, Electronic Tempura, Flute, and Bass Clarinet as the band go into this wonderful trance of Free Jazz, Avant-Garde beauty, difficult time changes, and at times, laid-back grooves to make understand on how the wonder of the music is still going in strong. At times, As Real as Thinking, pays homage to Captain Beefheart, Frank Zappa, John Coltrane, Magma, and John McLaughlin, and boy, do they know their musical influences very well.

The band recorded the album in Belgium in 2010 and it was recorded live with no overdubs. Machine Mass Trio shown a lot of improvisation when it comes to Avant-Jazz Rock and it feels like they make it sound like a beautiful and twisted journey with some strange and out-of-this-world moments that would make you get goose bumps to see which direction the yellow brick road they would go into. A lot of crazy saxophone work that Jordi does to pay tribute to Coltrane and to David Jackson of VDGG while Tony Bianco goes into the styles of Elvin Jones and Bill Bruford as Delville creates some Fripp-like work on the guitar that is crunchy, raw and powerful.

Pieces like UFO-RA which has this homage to the Swing-era and the ‘50s Sci-Fi B-Movie scores featuring a thumping bass line, keyboard sounding like a theremin in the midsection, and Jordi going into town with his sax work while the middle-eastern influences kicks into full gear on the ambient/atmosphere surrealism with Khajurao as Delville goes into this spiritual trance on the Bouzouki as Jordi creates this mourning funeral technique on the flute. Then there’s the stop-and-go fusion funk technique on Hero that has this cool vibe as the 18-minute musique-concrete, Falling Up which again, has this surreal improv between Bianco and Delville as it goes into the realms of the Soft Machine's Third-era, King Crimson, and Egg.

I didn’t know how to describe about As Real As Thinking, but after listening to the album about three times, I was completely hooked and Machine Mass Trio are almost the real deal. I hope they would release another album sometime in the future, they really got something up their sleeve. An album that is a journey beyond the infinite.
Posted by znathanson at 10:46 AM