Eversin - Tears on the Face of God 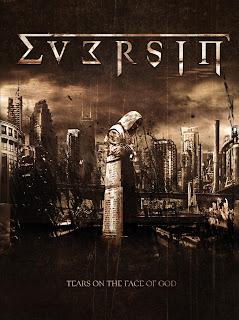 The Italian Thrash Metal band, Eversin, who are following in the footsteps of the kings of Slayer and early Metallica, are staying true to the roots of the genre and they are going to hit the Metal circuit and the festivals including Wacken sometime in the future. And their second album, Tears on the Face of God, is described as a massive monolith as a Panzer Tank that will take you on a journey through past and present battlefields. And let me just say, they are absolutely right to take the listener and headbanger from Point A to Point B on this explosive and eruptive album that is like a bullet train into uncharted territories.

And while the cover shows a futuristic utopian city that is now gone horribly wrong, the music itself is raw and powerful that has a lot of heavy vocals, powerful guitar lines and riffs, thumping bass work, and the drums sounding like a machine gun ready to reign fire, you know you are about to explore the darker side of War that you haven’t seen before in all of its glory. While there’s no stop sign on these eight compositions that is a blistering explosion that comes out of nowhere into at times the genre of Power into the core, it starts to make absolute sense to fit everything in its right place.

Angelo Ferrante’s vocal reminds me of Tom Araya of Slayer because he’s not trying to rip him off, but more of an homage and tribute to the music that Eversin grew up listening to which is evidential on the title track. Then there are three centerpieces songs like the ‘80s powder-keg riff explosion on the aftermath of the end of the world on Nuclear Winter which deals with the Post-Apocalypse of Hiroshima that is very powerful while The Tale of a Dying Soldier, with its melodic and sinister narration of the soldier writing his last memoir about hearing the screams and in the silence and darkness, and realizes that War is not right for him and his Sins are shadowed for him to become the self-sacrifice in flames.

Then, there’s the Death Metal race through time that sounds like a Jet Engine soaring over 500 miles per hour on the closing track, Under The Ocean which has this Jekyll and Hyde between clean and whisper-like shrieking vocals that again deals with the issues of War. You have to understand this album is about to hit home with soldiers who are struggling the daily lives to act as normal people and still have flashbacks (PTSD) from Iraq and Eversin has done one hell of a job to really understand on what it is to go inside the mind of a soldier who is suffering from this routine.

If the sounds of Thrash, Death, and Power Metal have combined into one and had a huge revival, then Eversin would fit into the genre and have finally come into full swing and this album is a must listen for people who want to really get into the spirit of the three genres or lend a Soldier a helping hand to let them know how dangerous the War in Iraq or at Home can really be.
Posted by znathanson at 10:48 PM