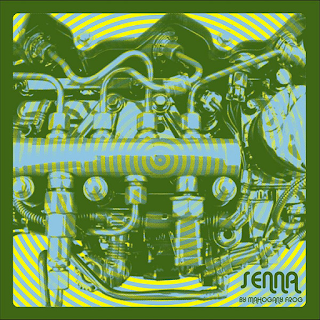 Since their formation in the late ‘90s in Canada, Mahogany Frog’s music is like a trip through time and space to create this wonderful ingredient of Psychedelic and Experimental Music as if they were formed at the end of the Flower revolution. Their album, Senna, released last year, is one of the most amazing journey’s to really get you up into light speed and go into different worlds and beyond the milky way that you’ve never seen before.

This is my introduction to band’s music and let me just say and I’m completely blown away from what I’m hearing from start to finish and do they know their roots of Prog very well. At times it feels like a Space Rock adventure as if the commanders on the ship were the early days of Pink Floyd, Ash Ra Tempel, CAN, Yes, and Hawkwind as they are the new commanders of the Millennium Falcon. The band considers Graham Epp on Guitar and Keyboards, Jesse Warkentin on Guitar and Keyboards, Scott Ellenberger on Bass, and Andy Rudolph on Drums and Percussion, and together it’s a soaring experience on the way they play their instruments and almost as if they had recorded the soundtrack to the 1976 sci-fi cult classic, Logan’s Run.

The Retrospective Sound of the late ‘60s and ‘70s golden era of Progressive Rock on Senna, are completely mind-blowing. There’s the spiritual uplifting organ and guitar-driven beats with a Symphonic Garage-Rock roaring upbeat on Flossing with Buddha that makes it a fun-filled arrangement that would have the Martians have a wonderful dance to this while Expo ’67 they have a grand time with a swirling fuzzy moog introduction before kicking off into Beatlesque Sgt. Pepper-era filled with guitar structures that are layered and powerful drum beats to set the atmosphere.

Meanwhile the suites on Message from Uncle Stan, just keeps getting better and better. Grey Shirt has this wild avant-garde eerie effect that pays tribute to Krautrockers Ash Ra Tempel as Green House goes into this fuzzy bass and keyboard work-out resembling the Nuggets-era of the late ‘60s. And then there’s another suite called Houndstooth, which sounds like a graphic novel written by Alan Moore, goes into this touches of the ‘80s electronic yet gothic-like rebirth scenery with a slide guitar background for a chance to be reborn before it becomes a terrifying Doom Prog-Metal atmosphere featuring this twisted chant on the drums and the evil spirits come to life to reign terror like no other!

I have listened to this about five times already and so far I’m getting hooked into Mahograny Frog’s music after hearing Senna and while they’re no vocals in the album, with straight-on instrumental tracks, I could tell that I’m soon going to be a huge fan of their music this year. It’s a beautiful, magical, and magnificent album that is soon going to be the Soundtrack of a Science-Fiction TV series sometime in the future.

As I’ve mentioned before, if you love the early days of Pink Floyd, Hawkwind, CAN, Yes, and the Nuggets-era, this is it!
Posted by znathanson at 9:05 PM