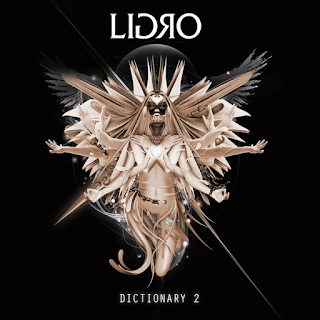 One of the most amazing things in the history of Jazz Rock scenes in the ‘70s, is that they would the music level up a notch in fast time changes, funk-driven moments, and some heavy guitar licks in the realms of John McLaughlin. But one of the bands to come out of the revival of the Jazz-Rock scene is a trio coming from the land of Indonesia called Ligro (which in backwards means “crazy people”) which they launched nine years ago. In the band, it considers; Agam Hamzah on Guitar, Adi Darmawan on Bass, and Gusti Hendi on Drums.

This is the band’s second album called Dictionary 2, and while this is my introduction to the band’s music from the Moonjune label, I’m completely blown away from hearing these guys from start to finish. It’s like a jet engine going six hundred miles per hour with a huge speeding zone that feels as if its coming right at you with a bang and seeing where the roaring beauty goes from one direction to another. Agam Hamzah’s guitar playing is completely out of this world and at times it has this combination of Allan Holdsworth, John McLaughlin, and Robert Fripp all rolled up into one piece and something magical happens when he plays the notes on the fret that is a jaw-dropping effect like no other.

Then you have Gusti Hendi’s drum patterns, as I’ve mentioned other Symphonic and Prog-Metal drummers, they drum work sounds like a Machine gun that reigns rapid fire when it comes to the instrument, and Gusti is one of them with his homage to Bill Bruford, Tony Williams, John Densmore, and Billy Cobham.  And then there’s Adi Darmawan’s bass playing which I imagine when he was a child grew up hearing bass players like Tony Levin, Stanley Clarke, Chris Squire, Jaco Pastorius, and Geddy Lee when he just nails those bass lines to give it a surprising twist and while the three members are carrying the spirit of Prog and Jazz-Rock, it’s a wonderful reception for a delicious dinner to check out and give it a hot and warm reception.

Beginning with a speeding introduction with a King Crimson-like hard rock introduction on the seven-minute piece, Paradox, you begin to think they are just another Jazz Rock band, but they’re not. They are staying true to the core of the ‘70s Jazz-Prog scene that comes at you with a bang. The guitar picking is completely mind-blowing and can really take the listener into another dimension in a far-away land that is beautiful and surreal.

There’s the stop-and-go blues driven roadrunner upbeats on Don Juan with Hamzah’s funky guitar licks and speed and slowed down layered rhythm and lines and Gusti’s drum lines, keeps the tempo flowing by seeing which way the yellow brick road would take them into. Bliker 3 begins with a Piano Concerto that feels like something straight out of Disney’s Fantasia as it goes into this darker and haunting turned into a soaring improvisation that Agam’s bass work as Hamzah gives him some help as they play like a team and then into this ambient avant-garde atmosphere that makes us feel we are inside the mind of a lunatic in an asylum.

Miles Away is a beautiful and loving tribute to Miles Davis’ fusion-era that has some ‘60s Psych beauty that they go into a Jimi Hendrix meets Omar Rodriguez-Lopez momentum that makes you want to dance and just get the groove on as Ligro takes it up a notch. One of the things I love about this band is that they really feel as if they had performed the whole thing live from start to finish. And what this trio has done is something spectacular and give the music of both Prog and Jazz a big warm hug and they know their musical inspiration and roots very well.
Posted by znathanson at 6:35 PM