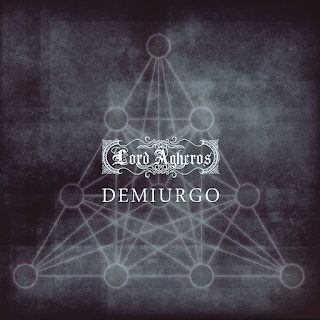 Black Metal is not an easy genre to get into from start to finish. Now when you think of the term, Black Metal, you think of Venom, Sepultra, Mayhem, and Mercyful Fate to name a few with shrieking vocals, powerful guitar work, and the drums going up a notch and singing about the occult, and mind you when you hear it, just prepare to take it to the ultimate limit for the preparations you will take. But it can also tell a story as well, and one of the band from Italy is called Lord Agheros which is a solo project from Evangelou Gerassimos, who I imagine was inspired by the four bands along with Ulver, has come a long way since their formation in the mid and late ‘90s and have taken a vantage of classical music, concept album, and operatic atmospheres to really get your mind flowing for an adventure you’ll never forget.

The music itself is terrifying, haunting, and hypnotic and Demiurgo, is a difficult, strange, and yet a mind-bending complex album that has some unexpected moments of a story that feels like something out of the gothic atmosphere. There are some unexpected moments like the musique-concrete ambient structures featuring an operatic vocalization on Erebo, feels like something straight out of the Phaedra period from Tangerine Dream’s early days while the first eight tracks which goes straight into the heart of snarling yet roaring vocalizations that can make you jump out of your listening chair to ask yourself “how in the hell did they do that?”

The vicious tracks like Lyssa, Eris, Thanatos, and Nemesi, punches you right in the gut that suddenly came out of nowhere to prepare for a rumbling earthquake with a lot of rapid machine gunfire including an orchestral background on the keyboards featuring heavy riffing guitar work that at times has a symphonic structured layered background. Then there are some moody and spacey moments on the second part of album in which it deals with the human world as the first part mentions about the infernal reign.

On the atmospheric tracks, as I’ve mentioned before, has a lot of spacey and avant-garde atmospheres on the keyboard and piano to create a calm after the firing storm for a moody yet haunting aftermath of the human race to resurrect. On the sinister touches of Lysimele, Gerassimos who is a virtuoso to play the instruments and the vocalization on the album, does this emotional concerto that feels like the aftermath of the war that has fought during the bloodiest war while he goes into this Ottmar Liebert flamenco turned classical guitar fingerpicking layered beauty on Ker before ending in a Celtic movement on Etere.

While the story feels like its straight out of a science-fiction short story in the realms of Philip K. Dick about the faces between good and evil from Erebo’s Sons and the usage of Greek Mythology, you can tell that Gerassimos has done a lot of research in preparation for the concept to see where he would take it into a different direction. This is an in-your-face turned strange beauty that is about to open the door and give you a huge wake-up call.
Posted by znathanson at 10:44 PM