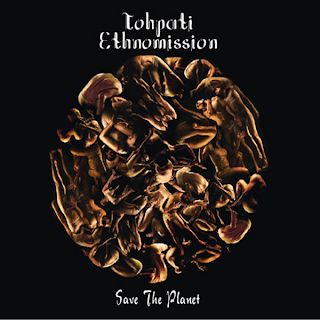 While the blog is a tribute to the label, MoonJune Records, and covering the revival of the Jazz Rock scene from around the globe, I’ve come across some good ones that have completely took me by surprise and there is the solo project that Tohpati (which is his real name) from Indonesia called Tohpati Ethnomission. Now I’m not an expert on the history of Indonesia, but what I have listened to is something that is beyond my wildest dreams and has got me hooked into this amazing virtuoso and that album is called, Save the Planet.

When I was listening to this album, I was completely hooked and not just from Tohpati’s astonishing guitar work, but the way he’s completely just taking the listener into a calm-like atmosphere into sounds of Jazz, Prog, and the Middle-Eastern sounds that captures a sound for Peace among other worlds to stop the two things, War and Anarchy. However, his guitar playing is going through the emotions of crying, anger, moody, and gentle throughout the entire structures on Save the Planet including a soothing vocalization done by Lestari that gave me chills down my spine on Sacred Dance before the band goes into a blistering yet warm-like movement to go into this climatic finale.

Alongside Tohpati the band considers; Indro Jardjodikoro on Bass, Endang Ramdan on percussion, Demas Narawangsa on Drums, and Diki Suwarjiki on Soundscapes and Flute. The music goes through various improvisations like an explosive dance set to mind-boggling music to have audiences just be taken away from hearing this from start to finish.  There’s this wonderful duel between Tohpati, Endang, Demas, and Diki on the 8-minute composition, Ethno Funk where they would do this competition where it would be this wonderful combination between the four instruments creating some difficult time-changes and go through Soft, Haunting, and Driven beats to really get you into an uplifting beat.

But then Tohpati gives a chance for the band members a moment to shine and that’s where Indro’s wonderful bass work comes in resembling Stanley Clarke and Jaco Pastorius on New Inspiration where Tohpati goes into these fast-jazz chords and into a bluesy line and Indro comes in with this unbelievable funky slap on the thumb that is jaw-dropping. Elsewhere, Battle Between Good and Beast has this spiritual yet powerful homage to Steve Morse, Frank Zappa, and John McLaughlin as Gateway of Life has Endang and Tohpati go into this tension moment as they do another competition on who could win the race between percussion and guitar.

The closer, Anger, has this evil and sinister battle aftermath as Tohpati challenges Robert Fripp with an homage to the ending of Prince Rupert’s Lament on King Crimson’s Lizard that is eruptive and hypnotic and an amazing way to close the album off with a Hard Rock Guitar structured rhythm and lead work. It’s just amazing from hearing this album and I can’t wait to see what Tohpati will have up his sleeves and what he would do next.
Posted by znathanson at 6:55 PM