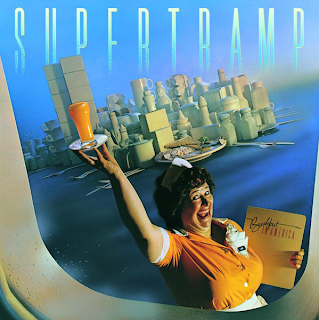 One of the most quintessential albums of all time, Breakfast in America was Supertramp’s biggest selling album of all time. Thanks to the hit singles: The Logical Song, Take the Long Way Home, Goodbye Stranger, and the title track. It gave Supertramp the top 10 hits and selling 6 million copies including the album as it skyrocketed to number one in the Billboard Charts in 1979. They became a favorite including Beatle Paul McCartney who admired the band during the album’s release. It gave Supertramp, the introduction of what’s called “Progressive Pop” as it opened the floodgates to the States.

The album is at the core of the Prog Pop genre. As Paul McCartney described them his “new favorite band,” is really a great opportunity to be appreciated by a Beatle. You could tell that he listened to their earlier albums: Incredibly Stamped, Crime of the Century, and Crisis? What Crisis? Unlike Pop bands like 10cc and the Alan Parsons Project, Supertramp had Rick Davies and Roger Hodgson who were the answer to John Lennon and Paul McCartney. They wrote some great material including Dreamer, Bloody Well Right, Give A Little Bit, and Ain’t Nobody But Me.

But the tension between the two started to grow during the making of the album. Originally, Rick Davies hated the title and wanted to use titles like: Working Title or Hello Stranger, but Roger won the verdict and the result is history. The cover was done by Mike Doug and used Kate Murtagh portraying as the Statue of Liberty holding a breakfast menu and holding a glass of orange juice as the city of the big apple is used with kitchen utensils, salt & pepper shakers, coffee cups, and two boxes shown in the style of the World Trade Center while the back cover shows the band members ordering breakfast, reading the newspaper as Kate pours a cup of coffee to one of the band members.

It was the first time that the album used a Wurlitzer Electric Piano, which is a 64-note instrument from an octave note of the major chord of C and forming a pickup system using an electrostatic system from a DC voltage to fit a mechanical sustain pedal. And it fitted well for Breakfast in America. The sound had been used on Crime and Crisis, but it was never used on any of Supertramp’s career and it made it the first album to be one of finest examples to use a Wurlitzer. It was released on March 29, 1979, where it charted for six weeks.

Breakfast in America became the biggest selling album since Pink Floyd’s Dark Side of the Moon in 1973. A work of unique geniuses, a usage of Beatlesque lyrics, pop ballads, and trying to make it to hit the big time in Hollywood, makes the album a highly mannered blockbuster smash and a great idea to have a sense of humor. From the opening soar of excitement on Gone Hollywood which deals with the creeps in the city of glamour and dealing with how despair and the destruction of L.A. can be a disgusting place to be as if the character wished he never set foot in the city. The Logical Song which has a strong connection the Prog-Pop power of the Beatles. Hodgson’s electric piano pop sound provides a strong groove alongside John Helliwell’s soulful sax solo while the song deals with the loss of innocence and condemning the education system. Rick’s composition of Goodbye Stranger sits in between the Pet Sounds-era Beach Boys sound and a twist of 10cc while parodying the Bee Gees.

The title track in which tells the story of the person’s introduction to the flavor of America and finding out if they have kippers in Texas as it priors to the up tempo beat and craves of the melodic statue of curiosity. Oh Darling is a perfect dance rocking ballad. Davies soulful voice on and the keyboard as well as Hodgson comes up with Lennon-like guitar sound as the two sing as if Lennon/McCartney are really pleased of what the two are doing despite the tension. Take The Long Way Home is a haunting mournful composition which features Davies disturbing Harmonica introduction as Hodgson brings the Prog Pop sound to another world with finding out how home is a long way to be with a surprising melody that became a top 10 hit single. The piano ballad filled with emotions shows Roger how good a singer he is with the heartfelt calmness of Lord Is It Mine while Just Another Nervous Wreck could have been written for the Goodbye Yellow Brick Road sessions.

Casual Conversations is very laidback in the style of the Aja-era of Steely Dan. It has a jazzy groove with the electric piano is very calm and almost is set in a smoky nightclub in the 1950s with its mellow atmosphere along with John’s sax solo to fill the nightclub scene as the next epic track closes the album very well like a storybook. Child of Vision, which is a feud-like song between Davies and Hodgson who are like brothers during this number. It deals with the creative differences they have between each other. The band almost are into attack mode as Rick plays this magnificent piano solo along with the keyboard duking it out while John closes the track with a short yet beautiful sax solo to finish album off well.

From that moment on, the relationship between Davies and Hodgson became strained after finishing the Breakfast in America tour as the battles became increased during the Famous Last Words sessions. Roger decided he had enough and departed the band in 1983 to raise his children and be a father and pursuing a solo career while Davies continued under the Supertramp banner and now are going to tour for their 40th anniversary and performing Hodgson’s songs which have pissed Roger off big time. But I won’t go into that direction.

Breakfast in America has put Progressive Pop into a crowning achievement through the mind of the two singers. It is one of Supertramp’s finest album of the decade 30 years later.
Posted by znathanson at 12:40 AM