Looking Towards The Sky: Progressive, Psychedelic, and Folk Rock From The Ember Vaults 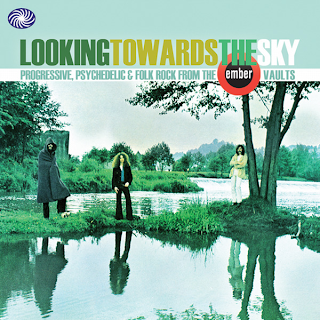 The eccentric and eclectic view of progressive, psychedelic, and folk rock of the late ‘60s and early ‘70s is a real treat. But thanks to the reissue label, Fantastic Voyage, who are helping to revisit the indie label Ember Records, this is worth checking out to know about the obscure and the underground scene of the psychedelic movement that reached to a cult status. It’s like Treasure Island, but it’s hidden through the generosity of the bands you’ve never heard throughout this compilation, and it pulls together like a tightrope. Looking Towards The Sky: Progressive, Psychedelic, and Folk Rock from the Ember Vaults may be considered one of the volumes on undiscovered gems of the independent rock scene that are filled unheard bands and artists to come close to the essence of unheard music that will give you goosebumps and take you surprise in the new dimension. Don’t forget, the track-list covers 15 of the bands that will make you have a love/hate relationship in huge debates, so let’s cut the bullshit fellas. So if you are interested and already have a huge growth in the music genre, this is your Wonka ticket here. If you were a part of the underground scene and for a new generation of upcoming progsters discovering this music, well here it is.

Now for most of you are thinking, “Is this a rip off of the Nuggets compilation?” No it isn’t. this is the history of the record label and for you listeners who are mouth-watery of hearing this will be blown away. Looking Towards The Sky takes you through a magic carpet ride through the unheard masterminds of the bands/artists that never saw the light at the end of tunnel to achieve the big time and drew from the weirdness and beyond the musical infinity.

Starting the album off is the political driven folk romp of 9:30 Fly’s Life and Times which includes a dynamic acoustic background and fuzz tone solo that is very dramatic including the vocalization as well while the Canadian garage rockers The Dorians push the nuggets envelope further with a dosage of psych-pop on the chugging rhythm section on Help For My Waiting and the eerie Beatle-esque harmonization of Good Love. Welsh-Prog Rockers Blonde on Blonde make an appearance on the album to give you a real kick in the gun with a strong energy in the force-like compositions like: Heart Without A Home, the homage to Arthur Lee and Love’s Forever Changes-era on Sad Song For An Easy Lady, and the 7-minute album version middle-eastern beauty of Circles from the Rebirth Album that you need to get thanks to the vocalization of David Thomas who could have been the next Roy Orbison.

As for US indie psych rockers Blue Beard, they brought an organic garage nugget flavor to Loving You as Rusty Harness who could have been the next Mick Farren with the upbeat soul dance clap of Goodbye on the edge of your seat. But it’s tracks like Doin’ The Best I Can by Paddy Maguire that bring a heartfelt ballad to eternity as if he and Traffic teamed up to create this piece while Knocker Jungle pays homage to Marc Bolan’s Tyrannosaurus Rex on I Don’t Know Why and Reality that makes it linear and harmonic. Meanwhile, 9:30 Fly are back on the horseshoe again with the 7-minute prog epic that could have been a cornerstone in the genre with the exhilarating number, Mr. 509.

Elsewhere, Davey Payne & The Medium Wave bring a pastoral horn section and string quartet along with a dynamic James Bond feel with the title track. You can tell this is something out of the oven that is cooked well-done and freshly baked as well. Then we get into the proto-hard rock antique in the reminiscent of Otis Redding with Milt Matthews Inc. as he brings the soul into the anti-war number on Disaster Area and as for the finale, The Back Street Band’s This Ain’t The Road is a fitting closing that is very power pop and very much in the mind of Badfinger’s Magic Christian Music-era.

This is a perfect compilation for anyone who wants to sink their feet in the hidden treasure of the obscure prog gems and look towards the next compilation Summer Turns To Autumn. For the tracks, this is a true adventure of the unheard bands and the possibilities of how prog rock stays alive and never dies.
Posted by znathanson at 9:17 PM