Paul Jones - Crucifix in a Horseshoe 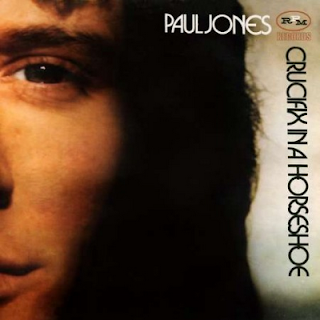 Probably best known for his work with Manfred Mann on hit songs like: Do Wah Diddy Diddy and 5-4-3-2-1 along with his acting debut with the 1967 cult classic Privilege, Paul Jones underrated 1971 album, Crucifix in a Horseshoe remains one of the must-have albums in any record collector to enjoy British Pop music with a bang. Originally released in 1971 on the Vertigo label, he decided to head to New York to record the album to come up with a mixture of Country, Jazz, and Soulful Blues as if he’s a composer to the band.

It’s not what you hear from his solo work, but it’s something worth the wait and Jones creates some magic on the album. According to the liner notes by King Crimson expert Sid Smith for the RPM reissue, Paul said that the title actually came from a magazine. “There on the front cover of one of them was a famous man. And he had this medallion hanging round his neck. It was a very large crucifix. Christ on the cross, surrounded with this horseshoe. The horseshoe says ‘good luck’ but the crucifix says ‘I’m a believer in Jesus Christ’, and therefore luck doesn’t come into it.”

All the songs on the album including the unreleased bonus tracks for the upcoming album follow up to Horseshoe which the label declined to release as if it felt it was too mainstream and no single on the album to promote it. Cut to years later, RPM created one hell of a packaging to feature the unreleased tracks that could have made it him a part of the Vertigo family. While Paul Jones enjoyed recording the album in the heart of the Big Apple, listening to these tracks has a New York feel and makes you feel that you are in the city including the soulful upbeat opener,

Life After Death, which has a Jackie Lomax sound that deals with how the religious movement has gone horribly wrong. Since becoming a born again Christian, Paul now has difficult time trying to appreciate this amazing track. But let’s move on. Motel Blues, a cover of Loudon Wainwright, is an eerie number with an acoustical beat. However it features some nice organ solos and guitar work done by Charlie Brown (no pun intended) while the background vocalists including the late Vicki Sue Robinson, creates angelic voices in the background during the number. And You Say I’m Too Dependent On My Mind is a down-home funk blues sound that almost is a reminiscent of Paul McCartney’s Ram-era. Now we get into the Country roots sound that Paul grew up as a child. It almost as if it could have been written during the Let it Bleed sessions about the life of a man who works in the industry as he gives the Construction Worker’s Song.

Now the next title, get ready: Song (For Stan Stunning and the Noodle Queen) I know it sounds very weird, but it’s a great little ditty. It also an homage to the Motown-era of the late ‘60s as you can feel the background in the song that resembles the soul and beauty of the Detroit scene. I could tell that Paul was in his happier times recording this song that how much the label showed a huge importance of him growing up. Next up is The Pod That Came Back has a swinging blues jazz upbeat as the song deals with Jones’ comeback in the limelight while The Mighty Ship resembles 1965 as if it’s a reminiscent of the Denny Laine-era of the Moody Blues. The last two tracks really takes us by surprise.

Who are the Masters which has a sinister yet disturbing bone-chilling amusement park rock sound followed by a sound that is in the mind of David Bowie’s Hunky Dory and Family’s Music in a Doll’s House as for Strangely Human Sound carries the image of the previous track with the ghost-like folk composition. Yet it has a little bit of the haunting elements to the number, the ending is features the wind going through the city. Next we come to the bonus tracks. The 8-minute groove, Voices, is one of the most wildly jazz fusion grooves that is real and has a catchy beat. Featuring Dave Macrae’s style of Herbie Hancock’s wah-wah organ funk introduction and Jones shattering Mouth Harp, it brings Jones extreme vocals to a predicted standstill. Wrestler is sort of in the style of Cream’s debut album as Paul Jones and his harmonica taking a trip with us with a song dealing with a wrestler struggling to achieve astonishment to a wild crowd.

Then it gets back into the Jazz Fusion beat with Two Tough Kids from a little help with female vocalist Joy Askew who worked with artists like: Joe Jackson, Laurie Anderson, and Peter Gabriel to name a few as she and Paul bring the energy with this Theatrical knot roar. Joy’s vocals really captures the scenery with Paul on how these two kids grew up in the streets and one day trying to be the next Bonnie and Clyde while the 7-minute homage to the Broadway scene in New York of Life Story. It has a bit of the Jacques Brel influence along with Brecht and Hair influence in there, but it’s a perfect combination.

The guitar shuffle and piano rocker Peter is a quirky little country ditty as the last number Marooned is a very quiet soft ballad with a bit of a romantic feel as if it was recorded for Manfred Mann to perform, but giving Paul Jones free rein to give it a real soaring closing. A truly masterpiece that deserves credit and for Paul as well, and even though Paul is a changed person and has some mixed feelings with the album, he deserves it 100%
Posted by znathanson at 5:27 PM