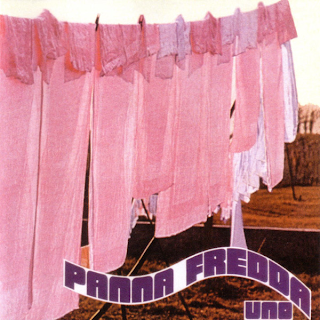 With a dosage of the tower of Pisa, Fellini, and Hard Rock, it’s only surprising that their only debut album, Panna Fredda might bring their homage to the love of British Prog Rock. They have a sound that is similar to Uriah Heep meets the MKII-era of Deep Purple. Formed out of the ashes of I Figli Del Sole and I Vun Vun in the late ‘60s in Rome, the band signed a contract with Italian label, Vendette and soon became Panna Fredda. The band released two singles from the label and soon worked on their album, Uno. Their only album, released in 1971, the band was already to call it a day due to the band members to join the Army. But the album itself is one of a kind thanks to guitar and vocalist Angelo Giardinelli as the compositions features some wild tracks that made a blend of the classical music sound and the dancing tribes.

Opening track, La Paura starts off with Lino Stopponi’s whooshing keyboard sound to make it very outer space-like sound with Angelo’s haunting vocals and guitar riffs and help from the bass and drum section with Pasquale “Windy” Cavallo and Roberto Balocco. Panna Fredda here bring texture to the piece, and they pack a punch to the album as they go into a the Fireball-era jam session as Angelo goes into a Ritchie Blackmore mode for the band to follow him wherever the solo will lead him into. There aren’t any excuses for the next upcoming track, but it’s quite amazing on how this band could have been the next big thing and would have given Deep Purple a run for their money.

However, an homage to Gracious atmospheric composition, Heaven comes into the scenery with Un Re Senza Reame as Lino does some sort of an ambient sound on the organ and Angelo’s acoustical folk songwriting complex comes into the foreplay as it becomes very frenzy at the end while Un Uomo sounds like a film-score for The Man With No Name trilogy with a rumbling yet disturbing number of love, death, and betrayal. These two tracks of Panna Fredda’s work is considered a perfect compilation for Halloween music for Prog lovers that could have been performed live and using the band’s love of the British Rock scene; it’s these two numbers that would have the listener jump out their seat and finding out why this band was ahead of their time.

It’s quite possible that you might find yourself in the nick of time to an epic or a suite. You could really began to pay close attention on where the track would lay ahead for you. There’s no turning back by the time you get to Scacco Al Re Lot – but after listening to this album twice, even if you love or loathe the album, you’ll be in luck to be introduced into the world of Italian Progressive Rock music.

On this track, it’s very Baroque and has a beautiful classical and melodic number that is in the mind of Washington Irving’s The Legend of Sleepy Hollow yet with a 17th century rocking boundary that has a gothic introduction at first and then turned into a piece that Camille Saint-Seans could have written for them that would have been a sequel to the Danse Macabre. Then we get into the epic of all epics with the 9-minute piece Il Vento, La Luna E Pulcini Blu (Sole Rosso). It features a harpsichord and more of the gothic background pieces that moves away from the prog sound with Windy doing a dooming wah-wah sound on the bass that sounds like it’s from hell and then it’s turned into a piece that it’s very much in the mind of Mozart. You have to admit, it’s a weird mind-boggling track, but it’s dynamic and insane at the same time.

Waiting is Lino’s composition, starting off with the whoosing moog and then turning it into a frenzy homage to Keith Emerson & The Nice is a fitting close to the album in the style of Dave Brubeck’s Blue Rondo a la Turk. The last two tracks are the singles of Delirio, a heartfelt ballad in the mind of Aphrodite’s Child and Strisce Rosse, an explosive psychedelic rocker that could have knocked off White Rabbit. Even though the tracks seem very interesting, it’s worth checking out and seeing how Panna Fredda became Psych turned into the band that could have been a part of the Italian circuit.
Posted by znathanson at 3:25 PM